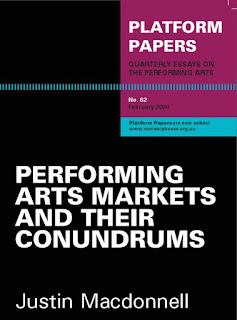 Performing Arts Markets and their Conundrums by Justin Macdonnell.  Platform Papers No. 62, February 2020.  Quarterly essays on the performing arts from Currency House.

Justin Macdonnell is more than well-qualified to ask the questions: he has “been employed in arts management, producing and consultancy for over forty years.  His early career was occupied variously as General Manager of the State Opera of Australia, Director of the National Opera of New Zealand, Program Director of the Festival of Sydney, Executive Director of the Confederation of Australian Professional Performing Arts and Artistic Director of the Center for the Performing Arts in Miami, USA.  As principal of Macdonnell Promotions he was for twenty years one of Australia’s leading arts management consultants to both the public and private sectors and to scores of arts organisations here and abroad.”

In a lengthy but fascinating history of arts markets on every continent, he even wonders about an unexpected “elephant in the room: the entire face-to-face market model is based on continued extensive international air travel, not only to assemble delegates at one or more market-like events in Australia—a great distance by anyone’s standards—but to continue to support international touring itself.  Despite Qantas’s optimistic claims of being carbon neutral by 2050, there is already a known, marked reluctance among those concerned at the threat of climate change to use such transport.”

We Canberrans didn’t need to fly anywhere when the first Australian Performing Arts Market seemed, to me at least, to appear quite out of the blue in the midst of the 1994 National Festival of Australian Theatre, directed by the doyenne of Kurt Weill singing, Robyn Archer AO.  APAM was set up by the Australia Council for the Arts, a statutory authority, nowadays simply known as The Australia Council, which is the Australian Government's principal arts funding and advisory body. The Council is the national advocate for the arts and its purpose is to “champion and invest in” Australian arts.

Macdonnell sees the what-for? question having two answers, which have had different degrees of emphasis in the parallel arts markets which have been established around the world.  He writes, “in order to have an effective trade fair one must have buyers and sellers. It is arguable that in APAM, while there have been a number of buyers, there has never really been selling. The work has been displayed but not sold.”

Then he goes on to say, “most observers today would acknowledge that these events have a networking and relationshipbuilding purpose alongside their buying and selling
role. While there is concern with the narrowness of what ‘market’ might mean, many feel that it has been useful to add new dimensions to the program in order to facilitate what might be called ‘curated conversations’.”

On one occasion, at a US market, “Australian colleagues and I once did a roaring trade there with mass-produced clip-on koalas.”  But then he contrasts this approach, saying “But in the end success is achieved mostly after long-standing connection between artist manager/producer and presenter.”

Macdonnell’s descriptions of the experiences of attending the many dozens of arts markets, as potential buyers, hopeful sellers and professional management and artistic networkers are not only interesting in their own light, but raise for us as critics a fuller understanding of the milieu – the world-wide culture of theatre – out of which the individual performances we see emerge.

A particularly fascinating case, seen here at the Queanbeyan Performing Arts Centre (The Q), was the dance work by Queensland’s Expressions Dance Company combined with BeijingDance/LDTX in two parts, Auto Cannibal by Stephanie Lake and Encircling Voyage by MA Bo under the overall title Matrix.  This international cooperative venture received five strongly positive reviews on this blog alone (November 2019), demonstrating the value of the very networking and relationship building that Macdonnell emphasises – while also showing how the arts market provides the opportunity for the director of a small regional performing arts centre to buy in, to great acclaim, new cutting-edge work to expand a local audience’s appreciation of the arts.

In the past few years, the government-initiated and managed APAM now faces the establishment of Australian Performing Arts Connections as “the national peak body representing performing arts presenters and creators in Australia”.  While APAM moves towards conducting a number of markets in the year, each in a different city with a focus (for example on Indigenous work in Darwin), 2020 sees the APAC annual conference combine with Performing Arts Exchange to become an annual APAX.

Perhaps, implies Macdonnell, APAM will become too spread out and diffuse; less effective for developing artistic relationships; less effective for selling to international buyers.  Perhaps, he writes, APAX—the Australian Performing Arts Exchange—stating that: “98 per cent of people coming to PAX and the conferences this year [2019] said that ‘Market and audience development are a critical part of the performing arts sector’ may in time challenge APAM for its place as the major performing arts gathering for the nation and New Zealand.”

So he concludes (with some reference to the role nowadays of social media and internet communication) “Regular opportunities for meeting and talking and learning are a central factor in maintaining such relationships—call them friendships if you will—and to the extent that such meeting and talking can be structured, goodwill and trust is gained and grown over time and when all is said and done, no amount of technology or wizardry of other kinds has yet found a better way.”