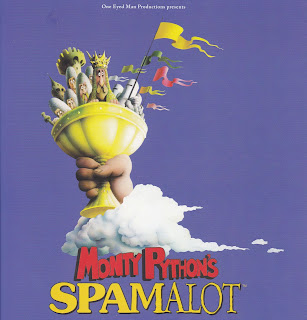 Photos: John McRea
I loved two features of this production – especially in comparison with the original big-stage shows.  It’s awfully grotty; and we all became part of the show, right down to Rob Miller, the peasant seated next to her husband (?) in B15 (ie B-ONE-S) – he was too shy to go on stage – who was awarded with all due ceremony for inadvertently discovering the Holy Grail.

And it was a delight to participate in the standing ovation!  And, of course, all singing “Always Look on the Bright Side of Life”.

Richard Carroll is a board member of In The Pipeline (Arts) Ltd, which runs Sydney’s Hayes Theatre Co, and, like this week’s other production connected to the Hayes Theatre Co, H.M.S. Pinafore at The Q, Queanbeyan, it was a joy to be able to laugh at the absurdity of life in the face of our summer, haec aestas horribilis, this year.  I haven’t yet been to the tiny 100 seat Hayes Theatre itself, but Carroll and his designer Emma Vine have made a highly successful transition onto the larger stage and auditorium of Canberra’s Playhouse which bodes well for the rest of their tour this year.

I would like to make special mention of Amy Hack as Patsy.  Not only were her coconut clip-clops exactly in time, but she stopped our inane laughter as Cramer Cain’s completely obtuse King Arthur sang about how he was “Alone”.  Her feelings, being so ignored, created the one genuinely sad, and serious, moment; giving purpose to the whole play.  Dramatically, her performance was my Holy Grail.

The whole cast, many switching between named roles and playing in the often weird apparitions in the ensemble, kept the show moving beautifully.  Marty Alix executed a great exit to the toilet as Sir Robin; Josie Lane complained wonderfully about not having any lines for most of the musical, despite having the female romantic lead as Lady of the Lake; Cramer Cain had, I thought, a much greater atmosphere of absolute authority (completely undermined by reality like our many recent Australian prime ministers) than the famous Tim Curry (who seemed to smile too much) as King Arthur; Jane Watt’s Sir Belvedere was brilliant in something like chain mail; Sir Galahad, by one-time Canberran, Blake Appelqvist, danced amazingly; Rob Johnson was so often something else that Prince Herbert melted into the crowd (was he the condescending Frenchman fooled by the empty wooden rabbit?); while Abe Mitchell as Sir Lancelot played the male romantic ‘grail’ perfectly.

If this is confusing, don’t worry.  You’ll be on a par with the knights who say ‘Ni!’.