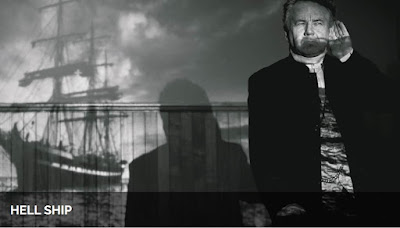 A shocking story from the past, now mostly forgotten in the mists of time, the harrowing voyage of the emigrant vessel, Ticonderoga, comes alive onstage in Michael Veitch’s new one man show, ‘Hell Ship’.

In 1852, 800 passengers and crew left England for Melbourne on board the ship.  They were mostly Scottish families seeking a new life in Australia.  An outbreak of typhus on board killed a quarter of the passengers and crew.  Victims were buried at sea and it was said that schools of sharks followed the vessel.  On arrival in Australia, the ship was forbidden to dock in Melbourne and was forced to anchor near Portsea where the remaining passengers were either nursed back to health or allowed to die.

In the play, the now elderly surgeon, who was aboard the ship as a young man and survived the fateful voyage, reminisces about his experience on the ship many years later while caring for a very ill patient overnight in Melbourne.

On a simple but effective setting, the production creates a strong atmosphere of the period with hauntingly effective sound and light designs and clever use of projections.

Michael Veitch gives a fine solo performance as the elderly surgeon, drawing us deeply into the details of the horror voyage as death stalks the ship mercilessly.  He wisely keeps his performance low key and avoids histrionics.  The result is chillingly effective.

At the end of the play we are left with a projected period photograph of a man and a woman.  The man was Michael Veitch’s great-great-grandfather, James William Henry Veitch, the surgeon he portrays in the play.  It’s a powerful ending to an absorbing story of courage, human suffering and survival.

Posted by Canberra Critics Circle at 11:51 AM