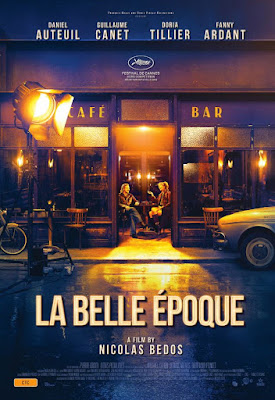 “We can’t rewrite the way we want people to be forever”, says one of the characters near the end of Nicolas Bedos’ delightfully clever movie, “La Belle Époque”.

Victor (Daniel Auteuil), a 70-something tech-phobic cartoonist, is struggling both professionally and personally.  His work is evaporating with the growing dominance of the Internet, and his wife, Marianne (Fanny Ardant), loathes him.  Things take an intriguing turn when Victor meets Antoine (Guillaume Canet) whose company offers a unique theatrical service where customers are able to revisit memories and play out fantasies through carefully orchestrated re-enactments.  Victor decides to relive the most memorable week of his existence, 40 years earlier, when he met the love of his life.

From the film’s startling prologue, the writer/director, Nicolas Bedos, takes us on a complex journey of memories, joyful experiences and regrets in both the present and the past.  The re-enactments of the past are intensely complex and teeter on the edge of believability but, due to the skill of the film-maker, it’s easy to go along on this journey.  We all have memories of good times we wish we could go back to.

The film is highly enjoyable on this level but it really takes off when the past unexpectedly collides with the present and what is real and what is re-enactment becomes blurred.

The production values of the film are very high with the detailed period re-enactments designed by Stéphane Rozenbaum and the atmospheric cinematography by Nicolas Bolduc.

Daniel Auteuil gives a fine portrayal of a depressed man who has strong emotions re-awakened through his experiences.  Fanny Ardant as his wife, Marianne, is equally as effective as a woman who still loves her husband but can’t live with him due to his current behaviour.

There are strong performances from everyone in the cast including various actors who play a bewildering number of different characters in the re-enactments.

This is a film that really engages the audience.  It’s funny, sad, surprising, unique and ultimately life-affirming.  It’s a journey full of enjoyable puzzles and well worth taking.

‘La Belle Époque’ is one of a large number of films that will be showing in the 2020 Alliance French Film Festival in Canberra at the Palace Cinemas from 12 March to 8 April.

‘Theatre of Power’, a regular podcast on Canberra’s performing arts scene with Len Power, can be heard on Spotify, ITunes and other selected platforms or at https://player.whooshkaa.com/shows/theatre-of-power.
Posted by Canberra Critics Circle at 5:44 PM