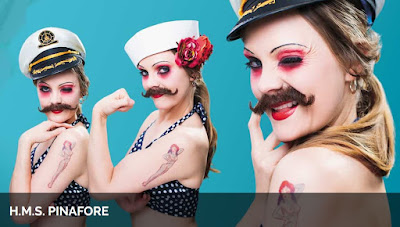 ‘A re-imagined, gender-bending, hyper-theatrical and kinky take on this Gilbert & Sullivan classic’, says the advance publicity.  This show certainly delivers what it promises and takes audiences on a very entertaining voyage with some of the strangest sailors you’ll ever encounter!

HMS Pinafore was the fourth collaboration by the team of Arthur Sullivan (music) and W.S. Gilbert (libretto).  It opened in London in 1878 and went on to international fame.  It is frequently performed to this day.

A satire on the British class system, it tells the story of a captain’s daughter, Josephine, who is in love with a lower class sailor, Ralph Rackstraw.  Her father is determined she will marry Sir Joseph Porter, the First Lord of the Admiralty, and Ralph and Josephine plan to elope.  Complications ensue, of course, but all ends happily after a few contrived surprises.

The style of music and the archness of the libretto can make this work a bit hard to take for people unused these days to operetta.  Giving the show a wildly modern twist breathes new life into it and this expert Hayes Theatre production is sure to surprise and delight everyone.

Director, Kate Gaul, adds an anarchic sense of wackiness to the show with a gender-bending cast who know how to deliver funny lines with skill and timing.  The parade of dazzlingly strange costumes, weird makeup, lots of glitter and crazy action add another level of enjoyment.

What is especially notable with this production is the respect for the music.  It’s beautifully and clearly sung by the cast, all of whom can handle the operatic demands of the score.  The cast also play the musical instruments on stage as part of the action.  The musical arrangements for the smaller number of instruments give the show a pleasant and unique sound.  The playing of the overture by the cast was a delight, setting the tone for the rest of the show.

The ensemble cast of twelve perform the show with gusto, never missing a trick.  Amongst the group is Canberra’s Tobias Cole, who is very funny and in fine voice as Captain Corcoran and father of Josephine.

It’s all played on a very attractive set designed by Melanie Liertz.  Ash Bee’s zany choreography adds immeasurably to the sense of fun.

This is a show that everyone will enjoy.  On the surface it’s just crazy, silly fun expertly done but the quality of the music and singing shows why this show is still being performed over a century later.

‘Theatre of Power’, a regular podcast on Canberra’s performing arts scene with Len Power, can be heard on Spotify, ITunes and other selected platforms or at https://player.whooshkaa.com/shows/theatre-of-power.
Posted by Canberra Critics Circle at 11:58 AM