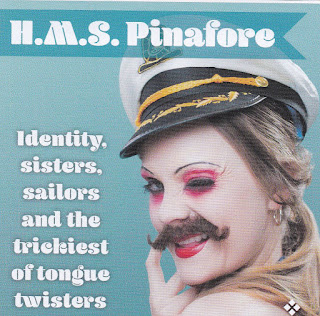 Fair moon, to thee I sing,
Bright regent of the heavens,
Say, why is everything
Either at sixes or at sevens?

In this summer of turmoil, of drought, fire, flooding rains, coal mining to reduce CO2 emissions, politically motivated sports-rorts grants and now coronavirus, all overseen by our equivalent of Sir Joseph Porter in the guise of Prime Minister Scott Morrison, I felt quite in tune with the Captain’s confusion.  As Sir Joseph sings

I am the monarch of the sea,
The ruler of the Queen’s Navee…
But when the breezes blow,
I generally go below,
And seek the seclusion that a cabin[et] grants…

From holiday in Hawaii to ‘cabinet-in-confidence’, our world is in more than sixes and sevens.  A mad-cap production of H.M.S. Pinafore was just what I needed.


Political correctness has caught me by the balls, so to speak: the non-profit left-wing communal basis of the Hayes Theatre Company has meant that I can find the names of the cast only in alphabetical order, without reference to who plays which parts.  But since, as Sir Joseph, Captain Corcoran and all the crew agree

A British tar is a soaring soul,
As free as a mountain bird,
His energetic fist should be ready to resist
A dictatorial word…
He never should bow down to a domineering frown,
Or the tang of a tyrant tongue.


So I can’t make pronouncements on the best performers (especially since half the time men are played by women, and the other half vice versa), but I can say the whole conception of this production is in the long tradition of apparently nonsensical satire which began probably long before Aristophanes’ Lysistrata (411 BCE, when the women very sensibly refused to have sex with their men while they still kept fighting The Peloponnesian War, 431–404 BCE), passing through Shakespeare’s A Midsummer Night’s Dream (in an appropriately absurd showing by Lakespeare in Canberra this month), my favourite novel The Life and Opinions of Tristram Shandy, Gentleman (by Laurence Sterne, in nine volumes 1759 – 1767), on to Monty Python’s Spamalot (to be seen here this week in a One Eyed Man Production), and Shaun Micallef’s weekly Mad As Hell (on the ABC, which at least one member of the Prime Minister – Scott Morrison’s – government wants to close down).


Phew!  I feel better already.  Thank you, Kate Gaul, Zara Stanton, Ash Bee, Nelanie Liertz, Fausto Brusamolino, Nate Edmondson and all the cast and crew of Hayes Theatre Co for bringing me back to my senses.  We all need a good dose of Gilbert & Sullivan every now and then – and this is a good one indeed.

A little further research has revealed the named roles.  In keeping with the company's collaborative nature, I list them here: