THE GRAPES OF WRATH 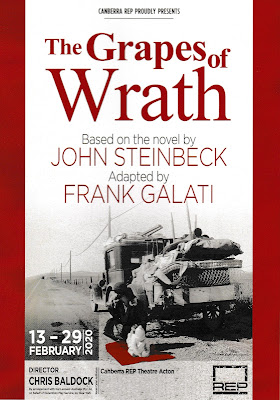 “The Grapes of Wrath” is one of those classic stories that everyone knows something about, even if they haven’t read the book or seen the famous Henry Fonda movie.  Experience a John Steinbeck story and it will stay with you for the rest of your life.

This story of a farming family fleeing drought-ridden Oklahoma in 1938 and heading for California with nothing much but an optimism that is soon sorely tested, shows the good and bad side of humanity.  The personal stories of the characters resonate with us as we take this epic journey with them.

Frank Galati’s expert 1988 stage adaptation teems with the many colourful characters from the novel and distils the action down to the essentials.

The play provides actors with opportunities to create characters of real depth.  James McMahon gives a fine performance at the centre of the play as Tom Joad, the idealistic young man who is changed forever by his experiences on the road.  As Ma Joad, Karen Vickery gives a fiercely powerful performance as the woman whose family values are a tower of strength for everyone who is travelling with her.

Employing both subtlety and skill, Michael Sparks gives one of his best performances ever as the ex-preacher, Jim Casy, and Amy Dunham is heart-breaking in a fine performance as Rose of Shannon, really getting under the skin of a young woman with unrealistic expectations of life.  John Whinfield as Noah Joad is particularly effective and touching in a key emotional scene and there is strong, committed work by everyone else in the huge cast. 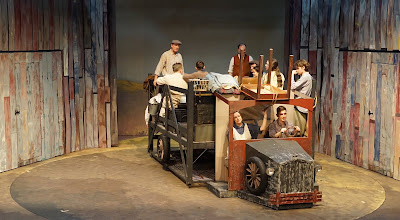 Chris Baldock has directed this show superbly.  His set design is an atmospheric and mechanical marvel that propels us deeply into the atmosphere of the time.  One beautifully managed complex set change early in the play got a round of applause from the opening night audience.  It was an exciting theatrical moment.

He has achieved an exceptional level of heart-felt and colourful performances from every member of his large cast. 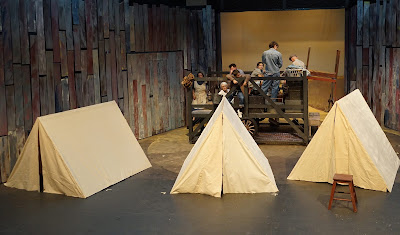 The lighting design by Stephen Still and sound design by Neville Pye add considerable atmosphere to the show.  Helen Drum’s costume designs for these poor travellers have a pleasing period authenticity and the Properties team of Antonia Kitzel and Michael Sparks sourced an unusually vast number of period items for this show.

With its large cast and period requirements, this is not an easy play to mount successfully.  John Steinbeck’s writing is still important in this day and age and Chris Baldock’s production honours the writer while producing its own unique and stirring vision.

‘THEATRE OF POWER’, a regular podcast on Canberra’s performing arts scene with Len Power, can be heard on Spotify, ITunes and other selected platforms.
Posted by Canberra Critics Circle at 1:58 PM