Fans of Monty Python and the Holy Grail and Monty Python’s Life of Brian will be in their element with this rollicking roughshod production which sits nicely on the Playhouse stage with audience on two sides as well as in the auditorium.

If you are on the stage expect to be dragged into the show. You might be minding a prop or a horse or even turn up in costume as Arthur (an authoritative Cramer Cain), his trusty servant Patsy (Amy Hack) and his knights set out on a quest for the Holy Grail.

Anarchy rules. Well, not altogether, since the plot is roughly that of the film of Monty Python and the Holy Grail with a bit of Life of Brian (Always Look on the Bright Side of Life) thrown in. There’s some resulting structure. The audience will be pretty familiar with the territory. They know the words to that song.

And of course The Lady of the Lake (Josie Lane) turns up, complaining wonderfully all over the place about the size of the role (despite having a lavish wardrobe) and taking every opportunity to sing what turn out to be parodies of quite a few musicals.  This seemingly thankless role is in good hands with Lane.

Most of the favourite scenes are there. The Knights who say Ni! (Blake Appelqvist resplendently dogged in red horned hat), the Holy Hand Grenade, the rude French up in the castle, Tim the Enchanter, the knight who won’t stop fighting despite losing quite a few limbs, brave Sir Robin, politically inclined peasants, the wedding that does not happen because of the massacre that does (blame Abe Mitchell’s noble Sir Lancelot, bent on rescue) and the sappy groom who just wants to sing… Then there’s the rabbit…

A live orchestra or band would ginger the show up considerably but that’s the economics of touring.

Look out for a gorgeous bit of surprise casting as the voice of God; bossy, canny and full of authority.
The cast go at it with unstoppable energy. If I had to name a few favourites they would be Bronte MacInnes’ appearances as the dour long suffering assistant stage manager, Jane Watt’s repeatedly dumb Sir Bedevere, Marty Alix as the wimpy Sir Robin (and a range of more assertive parts), Rob Johnson as the wet Prince Herbert and Amy Hack, very touching as Patsy, King Arthur’s taken-for-granted servant who also does the coconut shell bit about the horses.

Go along and sing along if you are a Monty Python fan. If you are not, this production might just win you over. 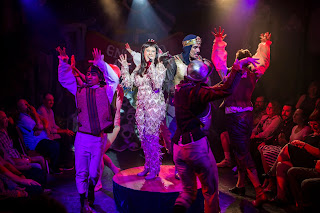