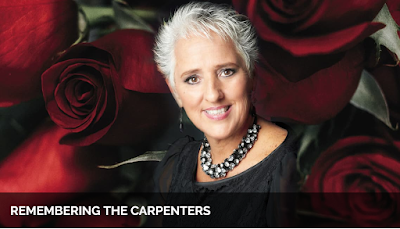 Siblings Karen and Richard Carpenter were known for their distinctive soft musical style, combining Karen's contralto vocals with Richard's arranging and composition skills.  During their 14-year career, they recorded ten albums, selling more than 90 million records worldwide.  Their career together ended in 1983 when Karen died from heart failure brought on by complications of anorexia.  Their music continues to be enjoyed by fans around the world.

In her show, ‘Remembering The Carpenters’, Canadian-born singer, Lisa Budin Price, pays tribute to the music of the Carpenters.  She has a fine voice and pleasant, easy-going personality.  She performs the songs very well and is supported by a four piece band and one female backup singer.

In an almost two hour show, highlights amongst the songs presented included ‘For All We Know’, ‘We’ve Only Just Begun’, ‘Rainy Days and Mondays’, ‘Close To You’ and ‘Top Of The World’.

The show did not play well as a theatre presentation.  Random anecdotes about the Carpenters were presented but it lacked dramatic continuity which could have lifted the show to a higher level.  The Carpenters’ career was an interesting one that ultimately ended in tragedy.  A well-written, compelling narrative accompanying the songs would have been more effective.

A distracting slide show projected on screens both sides of the stage during the show appeared to be the singer’s personal photos from a visit to a 50th anniversary of the Carpenters music in Los Angeles.  They were mostly of poor quality and of little relevance to the show.  Audience participation moments in the show also lacked imagination.

This tribute show was entertaining musically but needed better production values for a theatre presentation.

‘Theatre of Power’, a regular podcast on Canberra’s performing arts scene with Len Power, can be heard on Spotify, ITunes and other selected platforms.