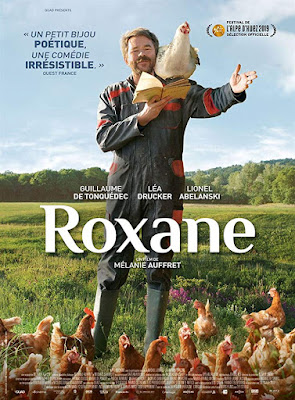 Writer/director Mélanie Auffret’s movie ‘Roxane’ tells the story of a Brittany chicken farmer, Raymond Leroux, who likes to read excerpts from Rostand’s play, ‘Cyrano de Bergerac’, to his flock with his gorgeous pet hen, Roxane, by his side.  When the all-controlling egg co-op cancels the contracts with the small chicken farmers of the district, Raymond enlists Roxane’s help with a scheme using social media to solve their predicament.

We’ve seen ‘little guy against the big guys’ stories before, of course, but it’s the quirky nature of this one that makes it a real winner.  Roxane in ‘Cyrano de Bergerac’ was the hero’s love interest and so it’s no surprise that in the movie, the hero’s much-loved companion is a hen named Roxane.

The characters of this farming community are finely drawn and well-played by the cast members.  Their eccentricities are real and not caricatured.  Guillaume de Tonquédec as Raymond Leroux wins us over with the warmth and genuineness of his character.  His love for Roxane and his other chooks makes him irresistible.

There are excellent comedy performances from Léa Drucker as Raymond’s wife, Anne-Marie, Lionel Abelanski as a farming neighbour, Poupou, and Kate Duchêne as Wendy, an initially critical Englishwoman and literature professor who is won over to help with Raymond’s unusual scheme.

Mélanie Auffret directs the movie at a deliberate pace with under-stated performances, keeping it all on a believable level.  The slightly supernatural responses from the hens and especially, Roxane, are very funny.  There is some computer-generated imagery involving the birds but it’s mostly achieved through clever editing and sound.

The film is reminiscent of those great Ealing comedies of the 1950s such as ‘The Titfield Thunderbolt’ and ‘Passport To Pimlico’ – gentle satirical comedies involving recognizably human characters and situations.

‘Roxane’ is a delight from start to finish.  You’ll want to have a pet like Roxane by the time it’s over, too.

‘Roxane’ will be showing in the 2020 Alliance Francais French Film Festival at the Palace Cinemas from 12 March to 8 April.

‘Theatre of Power’, a regular podcast on Canberra’s performing arts scene with Len Power, can be heard on Spotify, ITunes and other selected platforms or at https://player.whooshkaa.com/shows/theatre-of-power.
Posted by Canberra Critics Circle at 5:56 PM