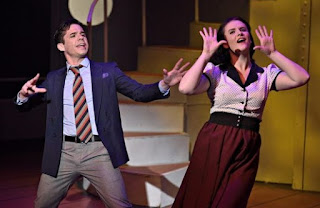 Canberra Philo's new production of Anything Goes starts off perfectly, with the overture playing to a film reel of scenes from the 1930s.  We don't just smile at the fashions and the manners, we also see the crippling unemployment and poverty of the Great Depression.  By anchoring the play in its era we realise that the lightness of this early musical isn't froth, it's the toughness that refuses to give in to despair.  When a character in this musical risks their job, they're risking everything, and that gives the show the dire stakes necessary for great comedy.

From its spot-on intro the play slides right into the action, introducing us to likeable business underling Billy Crocker (Marcus Hurley) and tough chanteuse Reno Sweeney (Kelly Roberts).  Billy has been a perfect gentleman to Reno, so of course she assumes that he intends to propose.  But Billy is in fact in love with classy society lady Hope Harcourt (Amelia Juniper-Grey) and plans to sneak aboard a cruise ship so he can foil her engagement to wealthy twerp Lord Evelyn Oakleigh (Jonathan Rush).

In the spirit of the screwball comedies of the period Reno follows Billy to sea - partly to change his mind, partly just to add to the chaos of the voyage.  And chaos it is, with not only the love triangle but an incognito gangster, a missionary priest returned from China, and Billy's own dipsomaniac boss adding their own dash of flavour to the Molotov cocktail.

The comedy is a delight because director Marty King enforces a cracking pace as brisk as any of the show's tap dances.  The songs by Cole Porter are deceptively airy with rhythms that are made for dance but the sly lyrics are laced with just a hint of acid, especially in title song "Anything Goes".  The script is just as effervescent - gleeful, mischievous and genuinely funny, with a generous supply of pratfalls, slapstick and even tender moments.

Marcus Hurley is a perfect fit for lead Billy, his Fred Astaire-like agility in sync with Cole Porter's equally nimble music.  Roberts' Reno is a lot of fun, the part giving her ample opportunity to showcase her voice.  Amelia Juniper-Grey completes the triangle with a beguiling Hope Harcourt, and to the credit of the performers both love matches are so credible that it is hard to guess how the knot will finally untangle.

The entire cast are on board with the comedy, with stand-out performances in the supporting cast .  Local theatre veteran Ian Croker is in fine fettle as softie gangster Moonface Martin, and has a great partner in Emma McCormack's sassy moll Erma.  On opening night Croker even manged to spin a mistimed sound effect into an extra joke, getting a big laugh from the audience.  Jonathan Rush meanwhile gives an over-the-top and giddy performance as the America-obsessed Lord Evelyn Oakleigh, simultaneously managing to make the character grotesque and sympathetic.  Steve Galinec is also a joy as the romantic, addled tycoon Elisha Whitney, a constant reminder that Billy is balanced on a tightrope and could tumble at any moment.

The major place where the show falters is in how it represents Chinese people.  Two characters, Ching and Ling, are badly dated stereotypes, obsessed with gambling, speaking in broken English, and easily tricked and led by white people - Orientalism in full bloom.  Recent productions such as the 2011 revival have recognised that this part of the show is genuinely offensive and tweaked the script to make it more inclusive, much as how modern adaptations of P.G. Wodehouse are stripped of dated and unfunny devices such as blackface.  The two performers do an excellent job in the roles, the main problem is a scene where other characters don their clothes and mince around talking about "Chinese Honah" in a yellowface performance.  This should simply never have happened, especially because other productions are awake to the problem here and have successfully dealt with it, and it is a black mark on an otherwise highly successful show.

Anything Goes continues a stellar year for Canberra Philo that began with the equally entertaining Rock of Ages.  The period references make this a nostalgia trip, but the characters have enough vitality that it somehow feels fresh and modern - these are people who know what they want and are confident bending the rules to get it.  With great songs, funny performances, and wonderful energy, Anything Goes is a pure delight, better than the entertainment normally found on cruise ships.
Posted by Canberra Critics Circle at 11:08 AM