The Amazon strikes back 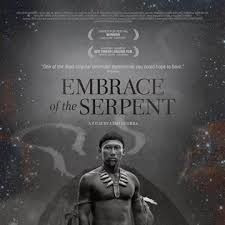 Embrace of the Serpent
reviewed by Jane Freebury janefreeburywriter.com.au
3.5 Stars
Against expectations, this journey set in the Amazonian wilderness is almost entirely told in black and white. The filmmaker, young Colombian Ciro Guerras, wanted to show the river and its peoples the way they were depicted in the photographic record of explorers early last century. He also thought it was not possible to capture the magnificent tropical rainforest in all its diversity and detail, nor do justice to the 50 words the indigenous peoples had for green, so he opted for monochrome. Does it work?
For those approaching this film with other spectacular cinematic visions in mind, a reversal in expectations is no bad thing. In years past, John Boorman’s The Emerald Forest took us into the Amazonian jungle in search of a white child left behind. Werner Herzog has taken us through there twice. In his film Fitzcarraldo we goggled at the ruthless folly of men aiming to set up a rubber industry, and in Aguirre, the Wrath of God we joined conquistadors on the trail of El Dorado, the elusive city of gold. Each of these films left an abiding impression of dense and intense, lush tropical jungle that tested mind, body and spirit of any outsider who dared to enter. In Guerra’s film, we join a gentler expedition, the search for the ‘yakruna’, a plant that possesses medicinal, healing properties.
Combining fact and fiction, Embrace of the Serpent is loosely based on the diaries of two scientists who entered the Amazon, years apart, during the first half of the 20th century.  Theodor Koch-Grunberg was a German explorer and ethnologist who studied the river’s indigenous peoples, and eventually died there in 1924. American botanist Richard Evans Schultes followed in his footsteps in the 1940s, searching for the yakruna as well.
Schultes eventually became more besides. In 1979 he co-authored a book on plants, their sacred, healing and hallucinogenic powers, with a scientific colleague who is regarded as the father of LSD.
Explorers working in the name of botanical and ethnobotanical science are not as discredited as the plundering foreigners of Herzog’s tales, but in Embrace of the Serpent they still must carry the guilt of their tribe. An interloper is an interloper and nature will exact its price from those who don’t belong. Guerra’s white male protagonists bear witness to the sins of those who preceded them, who brutally extracted the resources of the Amazon basin and corrupted and decimated its peoples. ‘Theo’ (Jan Bijvoet) and ‘Evan’ (Brionne Davis) are on a picaresque journey into the dark heart of colonialism that reaches its nadir with a visit to a mission, where abused boys turn into frightening acolytes of a deranged Christ-figure.
Most interesting is the relationship that both men, on their respective journeys have with their indigenous guide, Karamakate, played by young Nilbio Torres and by Antonio Bolivar in old age. Karamakate is the last of the Cohuiano, the last of his people and Torres’ proud strong figure adorns much of the advertising, looking straight to camera, fearless, disdainful and resolute.
Like Rolf de Heer’s contemplative The Old Man Who Read Love Stories, that also takes place (in full colour) in another part of the mighty Amazonian system, Embrace of the Serpent is journey of the mind, not action adventure.
The river and rainforest in Embrace of the Serpent definitely has visual power, and the -black-and-white is a thoughtful and interesting aesthetic choice for what is at one level a psychodrama exploring the labyrinthine passages of memory, individual and cultural. It is, however, curiously distancing and some of the interpellated natural images frustratingly haphazard. Despite my fondness for black-and-white, this monochrome jungle doesn’t fully convey the intoxicating, seductive power of nature, that winds around men and robs them of their faculties.
Many appear to have found this film spellbinding. Despite its international accolades, I thought it fell short of transporting experience, though it is still a powerful tale of colonial incursion in the Amazon basin, told by a shaman and survivor of its impact.
The Amazon strikes back? Yes, it does.