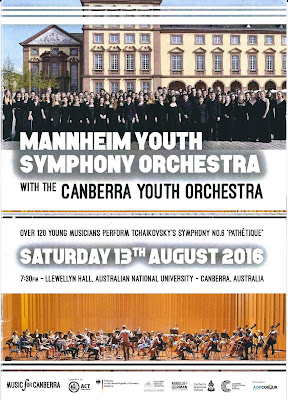 It’s not often you get the opportunity to hear over 120 musicians onstage at the same time so Llewellyn Hall was the place to be on Saturday evening.

The program commenced with the visiting Mannheim Youth Symphony Orchestra playing three works by Mendelssohn, Weber and Bloch.  After interval, the Canberra Youth Orchestra joined them for the major work of the evening, Tchaikovsky’s Symphony No. 6 ‘Pathetique’ in B Minor, Op. 74.

Mendelssohn’s Ouverture the Hebrides, Op. 26 was played with great confidence and clarity and Weber’s Concerto for Clarinet and Orchestra in F minor, Op. 73 was beautifully played by the orchestra.  Clarinet soloist, Rebekka Rebmann, played with great feeling after a slightly uneasy start.  Ernest Bloch’s 1939 ‘Nigun’ from Baal Shem was a rich work with Jewish themes.  The orchestra gave a haunting, atmospheric performance and the violin soloist, Lukas Ringle, played superbly.  The conductor, Jan-Paul Reinke, produced a great sound from the orchestra who played all three works with great precision.

The combined orchestras then played the Tchaikovsky Symphony No. 6 under the baton of Canberra’s Leonard Weiss.  The huge orchestra produced a wonderful depth of sound in the quiet passages of the work and the emotionally dramatic sections were awesome in their power.  The lilting second movement was especially well played and the great playing of the spectacular ending to the third movement produced spontaneous applause from the audience even though there was still one movement to go.  The more sombre last movement was movingly played.

The evening finished with Jan-Paul Reinke conducting both orchestras in a spectacular encore of the opening section of Richard Strauss’s ‘Also Sprach Zarathustra’.  To hear this live with such a huge orchestra was thrilling.

Len Power's reviews can also be heard on Artsound FM 92.7 'Artcetera' program on Saturdays from 9am.
Posted by Canberra Critics Circle at 12:01 PM