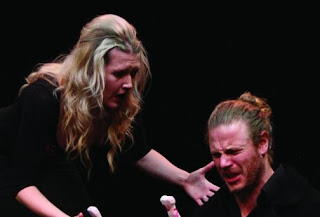 Macbeth is famous as a primal tale of murder and guilt, but it is also one of Shakespeare's great love stories.  Macbeth and his Lady understand each other deeply, compensate for each other's weaknesses, and have the shared goals that keep a lifelong partnership vital.  Of course, even the healthiest marriage has its hiccups - such as when Macbeth ruins an important dinner party by howling like a banshee at the spectre of the man he has murdered.

Lady Macbeth is undeterred, repeatedly insisting that her husband's ague will pass - a message intended as much for her husband as for the guests.  We've all been at that awkward party where martial tensions simmered away beneath a veneer of civility.  Here the fight isn't over putting the roast on, it's over a steadily escalating campaign of murder and atrocity - but still the Macbeths are trying to make their marriage work.  We should all be lucky to have that kind of love.

Director Jordan Best's production of Macbeth is lean and stripped of ornamentation, a forced march through Macbeth's temptation, corruption and bloody end.  The set is minimal, defined mainly by a platform performers can mount to deliver orations, and the acting is direct and to the point.  Even the bloodshed the posters in the foyer warn us about is oddly restrained, polite leakage from cleanly sliced throats rather than the elaborate gore we anticipate in a production of Macbeth.

The sparseness works for the play however, because it focuses the production on telling the story cleanly and efficiently.  With Shakespeare's dense language it is always possible to lose the narrative within endless poetic devices and asides, Burnham Wood hidden by all the trees.  An audience member might wonder, for example, why Macbeth spends so much time listing different breeds of dog, or why everyone keeps talking about poorly fitting clothes.  But Best's direction keeps the story on track, with the action in each scene obvious even when the language is oblique.

Chris Zuber is strong as Macbeth, a little tentative when depicting the character's inner battle between guilt and ambition at the start of the play, but increasingly confident as he embraces tyranny and the wrath the comes with it.  Zuber is well-supported by Jenna Roberts' sensual Lady Macbeth, a thoughtful performance that shows both the character's iron and vulnerability.  In this production, Lady Macbeth comes across as the prime mover in their murder plans, with Macbeth's slightly limp desire for status contrasting with Lady Macbeth's frantic ambition.  As the play progresses their roles reverse, with Macbeth becoming a fearsome dragon obsessed only with power while Lady Macbeth's suppressed guilt begins to betray her body.

The rest of the cast are exceptional.  Cameron Thomas starts slow as Macbeth's ultimate nemesis Macduff but builds in force through the second act until he finds a resolution grounded as much in grief as in wrath.  Tony Falla has the difficult job of playing role model (and intended James I ancestor) Banquo - the Gallant to Macbeth's Goofus - but manages to make him respectable without having him feel preachy.  Young performer Patrick Galen-Mules makes rightful heir Malcolm uniquely believable, giving him time to grieve for his murdered father as well as showing a Henry V-like command of men.  Michelle Lea Cooper as the first witch and Kate Blackhurst as Hecate also stand out as vibrant and wrathful emissaries of darkness.  A brief comic cameo from Jim Adamik as the drunken porter is sublime and relieves the tension without overwhelming the tone of the production.

While the set is minimal Chris Ellyard's brilliantly effective lighting design brings it to life.  The set is split by a gauze screen that like a two-way mirror can be either opaque or translucent, enabling some very clever special effects.  The lighting design successfully plays with the show's own ideas of light and dark, of deceitful appearances.  The costumes are less successful, outside of some luxurious ensembles for the leads too clean and almost cartoonish, out of step with the confidence of the rest of the production.  The procession of demonic figures in the second act is also underwhelming, especially after the high standard set for atmosphere and special effects in Macbeth's first encounter with the witches.

Creepy, bold, and hugely entertaining, Canberra Repertory's Macbeth is a success story, Shakespeare done well with limited resources.  The production does not take the well-worn play in a daring new direction but makes up for it with exceptional clarity and sense of purpose, making Shakespeare's tale of regicide, ambition and the supernatural crisp and accessible.  Even Macbeth experts may discover something new in this fresh and lively take on the great amateur murderer.
Posted by Canberra Critics Circle at 7:42 AM