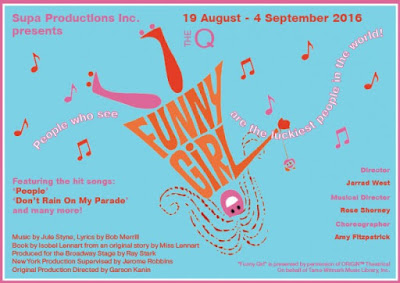 She’s the greatest star. She is by far. It’s hard enough to be the understudy on opening night. But to take on the role of Fanny Brice in Funny Girl and step into the shoes of an ill Vanessa de Jager at a moment’s notice is even more daunting. Add to that that this is the role made famous by Barbra Streisand on stage and screen in the Sixties and you have a recipe for sheer terror.  Director Jarrad West has cause to rejoice that Philippa Murphy was there to save the day with a performance worthy of any leading lady. With limited rehearsal, Murphy was able to capture the wit, the Jewish chutzpah, the vulnerability and the comedy of the Vaudeville comedienne and Ziegfeld  headliner in his famous Follies. Murphy is a star on the rise and anyone fortunate enough to catch her performance in Funny Girl will witness a star of the Australian musical theatre stage in the making.


This in no way diminishes the quality of other performances or the excellent standard of production of Supa Production’s  fine staging of a rarely revived musical by Jules Styne and Bob Merrill with a book by Isobel Lennart, based on an original story by Miss Lennart.  Lennart’s book is a simple telling of the life of Jewish girl, Fanny Brice, who becomes a star of the Follies of impresario, Florenz Ziegfeld, played with a certain sobriety by Peter Dark.  It traces her unfortunate marriage to charming con man and compulsive gambler, Nick Arnstein (Joel Hutchings). There are excellent performances from the principals, including Will Huang as the devoted Eddie Ryan, Ziegfeld’s dance master, Michelle Klemke as Fanny’s Jewish Momma and Shennia Spillane as the gossipy, busy-bodying neighbour, Mrs Strakosh. Supported by a lively Ensemble the show moves swiftly under West’s tight direction and the energetic, colourful choreography by Amy Fitzpatrick and the accompaniment of the orchestra under the baton of musical director Rose Shorney .
Funny Girl is not without its design challenges. Set during the early decades of the Twentieth Century, the setting changes from Fanny’s humble home to the theatre to Fanny and Nick’s lavish home and the sumptuous setting of the Ziegfeld Follies. It’s a huge challenge for an amateur company on a limited budget, and it is a credit to costume designer Suzan Cooper that she is able to costume a large company in everything from Fanny’s costumes to the Top Hat and Tails of the male chorus, the glittering feathers and spangles of the showgirls and the army jackets for the Rat-Tat-Tat-Tat routine. Hamish McConchie’s lighting design sets the right atmosphere with the effective use of the cyclorama and the follow spot to highlight Fanny’s People and Don’t Rain on My Parade.


Supa’s Funny Girl scores a hit with numbers like People, Don’t Rain on My Parade, Sadie Sadie and I’m The Greatest Star. Songs are sung with verve and panache and there is fine voice from Dave Smith as Ziegfeld’s Finest Tenor during His Love Makes Me Beautiful, Hutching’s Nick Arnstein in You Are Woman; I am Man and the reprise of Don’t Rain on My Parade and Huang’s Eddie Ryan with If A Girl Isn’t Pretty and Rat-Tat-Tat-Tat.

Ultimately, Funny Girl is written for Fanny Brice and on opening night audiences witnessed a rising star in Philippa Murphy.  Supa Productions have hit the jackpot with the revival of a show that captures the glamour and the saga of life in the theatre, as well as the personal struggle and success of the funny, witty, complicated  stage darling, Fanny Brice. This is a show to see twice -once to delight in Murphy’s performance and be entertained by the Supa team and twice to catch the talented Vanessa de Jaeger when she returns to the role. Whatever you do, don’t miss Supa Production’s Funny Girl!
Posted by Canberra Critics Circle at 10:06 AM