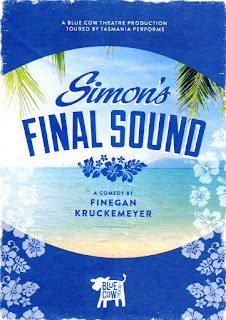 This is a play written supposedly for adults by a successful writer for young children 5 to 8 years old.  A review (unacknowledged) published in The Brag (http://www.thebrag.com/arts/those-who-fall-love-anchors-dropped-upon-ocean-floor) of another play by this author, also supposedly for adults, which I haven’t seen but which was recently presented at the SBW Stables Theatre, Sydney, sums up my response to Simon’s Final Sound:

“There are both amusing and heartfelt moments, but ultimately, Those Who Fall In Love Like Anchors Dropped Upon The Ocean Floor is a light piece of theatre. Diluted between comedy and romantic drama, it’s a murky mix that isn’t particularly strong on either front.”

I can only add that in Simon’s Final Sound there is very little comedy, a lot which has to be called farcical, quite a bit of entirely irrelevant slapstick, and an ending which would be tragic if the apparently important issue – of the sudden onset of deafness – had been developed in any serious way over the two hours leading up to this point.

What point? was the issue for me.

I thought very seriously of not publishing a review, because at least the actors should not feel that they are to blame.  Director and designer Robert Jarman has asked his actors to take on the task of turning an impossible script into worthwhile theatre.  I felt for them as they very professionally overplayed such thinly written characters, and managed to get some laughs from skilful clowning.

Though I don’t wish to deny Finegan Kruckemeyer’s success as a children’s playwright – his bio emphasises he has “had 79 commissioned plays performed on five continents and translated into six languages” and 7 “at the Sydney Opera House” (Shakespeare wrote only 37 for comparison) – he has clearly written a 50 minute children’s piece into a 2 hour long fantasy made ‘adult’ by crude sexual unfunny funny-bits which placed the lone woman character well down the scale of acceptable human rights.

The idea that we should be amused by 40-year-old unmarried Simon’s struggle to deal with a diagnosis that he will go deaf within a year, be elated when he seems to find the musical island from the story which his aunt had told him to help him go to sleep at the age of eight, and then be .... what?  Sorry for him?  Devastated by the tragedy?  Ecstatically happy for him because he heard the music after all?  ... when all the sound and lights are cruelly switched off.  That’s the end, folks!  Lights up, and clap, because wasn’t it all good fun?

Sorry, Finegan, but whatever your reputation, Simon’s Last Sound is a bummer of a play for adults – and my word is nothing like as offensive as the fucks, penises and tits you thought would make an adult audience laugh.  Some did laugh at the Yoga on the Boatdeck scene, admirably performed by Andrew Casey, and they laughed at the joke about making a Bungee Jumper think the rope was not tied on after they were on their way down.  And sliding around on the deck in the storm where each of the four came to hug, or at least grab onto, each of the other three with implications about their relationships, was mildly amusing.

But in the end it’s more suited to a ten-year-old boy’s idea of funny.  And nowadays even he would think the language and the treatment of the girl was just too gross, and the storyline more suited to a five-year-old!

Mr Kruckemeyer should take a leaf out of Eddie Perfect’s notebook and go and see The Beast at the Sydney Opera House (reviewed here July 31, 2016), where he will learn how to write a really funny adult comedy.