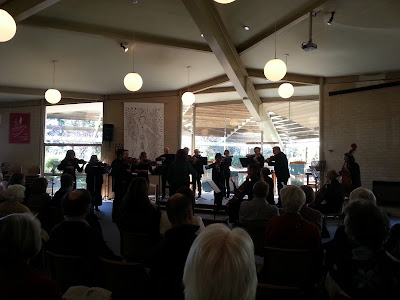 Having performed Hubert Parry’s ‘English Suite’ earlier this year, it was good to see that Musica Da Camera had scheduled another work by Parry in their latest concert.  ‘Lady Radnor’s Suite’ was commissioned by Helen, Countess of Radnor, and, surprisingly, she also conducted the first performance of it in 1894.  Patterned on the early classical orchestral suite of dance movements, the work is melodic and is strongly and delightfully reminiscent of Victorian England.  The orchestra played it very well especially the third ‘Sarabande’ movement and the rollicking finale.

This was followed by a nice performance of Handel’s twelfth Concerto Grosso in B minor and then the highlight of the concert – ‘Serenade For Strings’ by Sweden’s Dag Wiren  Apparently his only international success, this 1937 work is bright, lyrical and with unexpected moments that make this work fascinating to listen to.  The opening movement, with its contrasting rhythms, was beautifully played by the orchestra and the second movement with its extensive string plucking was nimbly handled.  The last movement, with its familiar theme used in Britain’s 1960s ‘Monitor’ television program, was a well-played finale to the work.

Australian composer, Graeme Koehne, is best known for his orchestral and ballet scores.  In three movements, his 1983 ‘String Quartet’ is an interesting and melodic work with dark tensions underneath.  The orchestra played this work with real depth and feeling.  The final Elegy was especially movingly played.

The final work presented – Janacek’s ‘Suite For Strings’ – was composed in 1877.  While there are hints of Beethoven and Dvorak here and there, overall the work is distinctly that of Janacek and an excellent one to end a concert.  The orchestra was especially impressive playing the second Adagio movement.

As always, Leonard Weiss conducted the orchestra with strong clarity of purpose, obtaining fine results from this enthusiastic and very able group of local music makers.  Musica Da Camera are always notable for the variety in their choice of works played.  This was another fine concert from this Canberra orchestra.

There will be a second performance of this concert on Sunday 28 August at 2.00pm in the Gunning Shire Hall.

Len Power’s reviews can also be heard on Artsound FM 92.7’s ‘Artcetera’ program on Saturdays from 9am.
Posted by Canberra Critics Circle at 11:01 AM