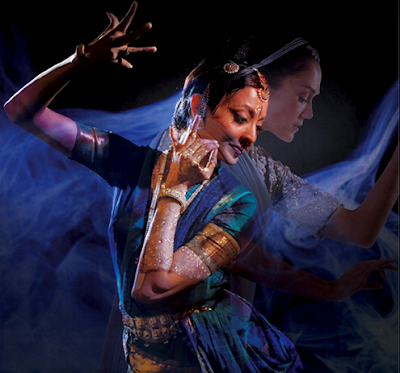 Apart from performances by both Patel and Lea, the program also featured several local professional Indian dance exponents, including husband and wife team, Jenni White and Mahesh Radakrishnan, who, following a short introduction by Lea, and the showing of a short film giving an insight into Seeta Patel’s classical practice, commenced the program with a mesmerising performance of “Ashtapadi No. 19”.

The storyline of the song sung by Radakrishnan, accompanying himself on a drum, was gracefully interpreted by White, beautifully costumed in traditional dress, and incorporating the sophisticated vocabulary of sign language based on gestures of hands, eyes and face muscles inherent in the Bharata Natyam style. It was a beautifully executed performance which set the standard for the rest of the evening.

Also wearing spectacular traditional costumes, Vanaja Dasika and Suhasini Sumithra, dancing to a recorded soundtrack, performed an energetic duet, entitled “Shivashtakam” in Kuchipudi style. For the duration of this dance, the perfectly synchronised dancers mirrored each other’s gestures throughout the long series of complex eye, hand and foot movements to interpret the cycle of death and rebirth in the world of Lord Shiva.

Between these two items, Liz Lea, an extraordinary dancer in her own right, performed two contrasting pieces. The first, “The Incense” is Lea’s reinterpretation of a piece originally choreographed by Ruth St Denis in 1906 in which a temple dancer makes offerings to the Gods. Costumed in a bejewelled, diaphanous blue costume, Lea’s superbly controlled, graceful movements perfectly captured the mystical mood suggested by Henry Worthington Loomis’ evocative music.

Her second offering was “When Tagore met Einstein – or part thereof”, a piece created by Lea in response to a 1930 conversation between Rabindranath Tagore and Albert Einstein. Having seen an earlier version of this work, it was fascinating to have the opportunity to revisit it and observe how Lea has utilised her knowledge of the Bharata Natyam technique to hone and refine it.

Performed to a recording of Lea’s voice repeating the exchange between the two men, Lea takes her cue from words that the men utter, to create movement passages, which she punctuates with subtle facial expressions and traditional gestures to clarify and underline the arguments. As the work progressed, spontaneous little laughs and vocal acknowledgements from the audiences indicated how successful her efforts had been in translating this unlikely source material into an engrossing dance work, which will no doubt continue to evolve in future performances.

The final section of the program was given over to Seeta Patel, who performed two pieces of which the first, “Patra Prevesham – Ananda Nartana Ganapatim”, choreographed by Mavin Khoo, proved to be a miniature compendium of the Bharata Natyam technique.

Describing the dancing form of the elephant headed god, Ganesha, the work cleverly encapsulates all the hallmarks, the fixed upper body, the flexed knees, the complex footwork, the hyper-extended fingers, the use of eyes and facial expression, all meticulously interpreted by Patel in one engrossing masterclass.

Not waiting to recover her own breath, Patel then held her audience spellbound with a description of her next dance, “Padam (Theruvil Vaaraano) – Raga Kamas”, telling the story of a young Tamil woman waiting in anticipation for the Lord Shiva to pass by her home in a procession.  She followed her flawlessly spoken description with a performance in which every nuance of the story was etched on her face and body with such stunning clarity that it was impossible not to be deeply moved.

It was a masterful and memorable performance on which to end an extraordinary evening of insights into a highly refined art form.

In the Q & A, conducted by Dr. Michelle Potter after the performance, Seeta Patel proved just as eloquent with words, as she was with dance, as she responded to enthusiastic questions posed by her audience.


An edited version of this review was first published in the digital edition of CITY NEWS on 21st August 2016.
Posted by Canberra Critics Circle at 11:16 AM