THE MARRIAGE OF FIGARO 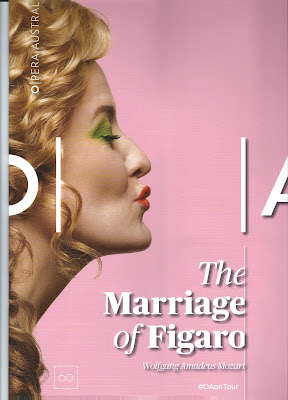 First performed in Vienna in 1786, Mozart’s ‘The Marriage of Figaro’ has gone on to become one of the most popular operas of all time.

The amusing story involves a wealthy household in Seville.  Figaro is marrying Susanna, but the Count wants to seduce her first.  Marcellina wants Figaro and the Countess just wants her husband back.  Plots and counter-plots fly thick and fast and, of course, everything works out fine in the end.

Michael Gow’s translation and production adds freshness and down to earth contemporary humour while remaining true to its period.  Sung in English, great care has been taken with diction to ensure the words can be clearly heard and the physical action of the farcical aspects of the plot has been very cleverly staged.  The performers all present in depth, realistic characterizations and display a gift for comedy in their delivery.

The fine ensemble of singers all gave musically strong and satisfying performances.  Steven Gallop’s distinctive bass voice for Doctor Bartolo was heard superbly in his ‘Vengeance’ aria.  Emma Castelli sang a nicely emotional ‘Porgi amor, qualche ristoro’ and Celeste Lazarenko gave a delightful ‘Voi que sapete che cosa è amor’, one of the most well-known arias in opera.  In fact, the highlights were too numerous to mention – everyone in the cast had their moment to shine.  There was also especially fine singing by the local choir of young voices and they looked delightful in their costumes.

Nicely conducted by Paul Fitzsimon, the eight piece orchestra played very well but needed more strength in the strings at times.  The production designed by Robert Kemp was simple, very practical and attractive.  The cast were dressed in fine period costumes.  The lighting design by Matt Scott complemented the set very well and the use of footlights gave some nice shadow effects.

‘The Marriage Of Figaro’ is always a lot of fun but this production makes things a lot clearer and accessible for today’s audiences.  If this was the first opera you decided to try, you couldn’t do any better.

Len Power’s reviews can also be heard on Artsound FM 92.7 ‘Artcetera’ program from 9am on Saturdays.
Posted by Canberra Critics Circle at 10:36 AM