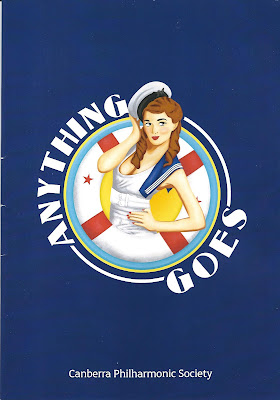 “Anything Goes” was Cole Porter’s smash hit musical of the 1930s.  A vehicle for Ethel Merman, it introduced a number of songs that have since become standards.  The production presented by Canberra Philharmonic Society is a revised version from the 1980s which, while maintaining the period of the story, streamlined the book of the show and changed the song list, dropping some songs and adding others from the Cole Porter catalogue.  Even the lyrics of some songs have been changed.  Many of the topical references made by Porter were about his contemporaries at the time and would be meaningless to most audiences these days.

Marty King’s production is a delight from start to finish.  He has captured the style and pace required to make this show come alive.  His enthusiastic cast do the rest, having great fun with the funny and improbable story and singing and dancing with glee.

A star vehicle needs someone in the lead who really shines throughout the show.  Kelly Roberts as Reno Sweeney gives the role glamour as well as the toughness this worldly-wise dame needs and sings her songs wonderfully.  Her “Blow, Gabriel, Blow” lifted the roof off the Erindale Theatre on opening night.

Marcus Hurley gives a great performance as the scheming Billy Crocker, finding the fun in the character and playing it for all it’s worth.  His lead singing for “All Through The Night” was especially memorable.

Amongst the large cast there are some standout performances.  Ian Croker’s comic timing was excellent and his “Be Like The Blue Bird” brought the house down.  Emma McCormack shone as the hard-boiled Erma Latour, especially in her “Buddy Beware” number with the sailors.  Amelia Juniper-Grey was pretty and sang with great sensitivity.  Jonathan Rush pulled out all the stops in his hilarious portrayal of the dopy English Lord and Steven Galinec and Anita Davenport were very funny as the older travellers.

Choreography by Emma Tattam was especially fine in this production.  She made the entire cast look like they dance for a living.  Riley Gill’s tap dance choreography was one of the highlights of the show’s title number.  Musical direction by Jim McMullen was excellent from start to finish.  That band was ‘hot’!

Ian Croker’s two level ship-board set was nicely designed, giving lots of playing areas for the director to work with.  Pip Miller and Heather Palazzi costumed the huge cast with eye-catching and well-designed period clothes.  Lighting and sound by Eclipse Lighting and Sound worked very well but some light cues were a little slow on opening night.

This is a very funny, colourful and tuneful show, played by an expert cast.  If you want to see how much fun life was in the 1930s, don’t miss it!

This review was first published in the Canberra City News digital edition on the 12th August.  Len Power’s reviews can also be heard on Artsound FM 92.7 ‘Artcetera’ program from 9am on Saturdays.