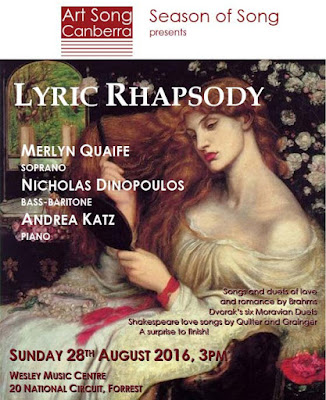 Art Song Canberra’s ‘Lyric Rhapsody’ concert presented three highly regarded artists in a concert showcasing the music of Johannes Brahms and Antonin Dvorak with a tribute to William Shakespeare thrown in as well.  It was a nicely judged program of music that worked very well.  The singers, Merlyn Quaife and Nicholas Dinopoulos, were in fine voice and the accompaniment on piano by Andrea Katz was superb throughout.

The first half of the program comprised ten songs by Brahms.  In solos and duets, the two singers had every opportunity to display all aspects of their fine voices.  Merlyn Quaife’s beautiful soprano voice and moving delivery of the ‘Lullaby’ was one of the highlights of this set of songs.  Not only was it sung technically very well but, through her body language and eye contact with audience members, the singer drew us deeply into the emotion of the song.

Nicholas Dinopoulos has a thrillingly powerful voice when singing dramatically but is equally impressive with the quiet, reflective passages of a song.  He demonstrated this ability particularly while singing ‘Sapphic Ode’.

The finale of the Brahms works was a duet, ‘The Path To Love’, which was not only sung very well but you could see how much the two singers enjoy working together.  Andrea Katz’s piano accompaniment for this song was especially memorable.

The second half opened with three songs from Shakespeare’s plays.  All were finely sung but the duet, ‘It Was A Lover And His Lass’ from ‘As You Like It’ was the highlight, again displaying the great chemistry between the singers.

The last section of the program was a set of Moravian Folk Songs by Dvorak.  All five were sung as duets.  The highlight was ‘Scheiden Ohne Leiden’ (Separation Without Suffering) in which both singers displayed tender, heartfelt emotions as the song came to its sad conclusion.

This was yet another excellent program from Art Song Canberra with fine singing and piano playing.  I’m looking forward to their next program on the 9th of October when Jeremy Tatchell, baritone, and Elena Nikulina, piano, will present ‘From Russia (and New Zealand) With Love’.

Len Power’s reviews can also be heard on Artsound Fm 92.7’s ‘Artcetera’ program on Saturdays from 9am.
Posted by Canberra Critics Circle at 10:08 AM