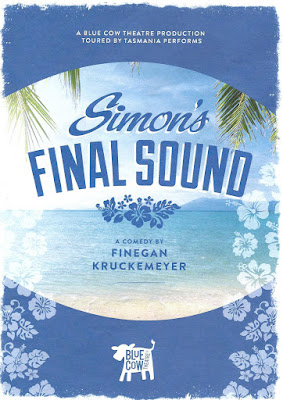 Playwright Finegan Kruckemeyer has, according to the program, an impressive list of credits.  He has had 78 commissioned plays for young people and adults performed on five continents and translated into six languages.  His work has been performed in international festivals, US and UK tours and at the Sydney Opera House.  With that experience behind him, you’d expect ‘Simon’s Final Sound’ to be pretty good.  It isn’t.

The story of a man who has just been told he’s going deaf, we follow Simon’s dream to find an island described in a bedtime story his aunt used to tell him.  Along the way he picks up with three quirky Aussies who decide to share the dream with him.

Simon is a bit of a disaster – a chap in his forties who’s never done anything of significance.  His companions include a married couple with problems – Ginny and Michael – and an obnoxious friend of Michael’s, called Claude, who’s never grown up and talks about sex all the time.

The thin story is padded out for two long hours with irrelevant scenes, especially in the second act with the long Tai Chi scene, the long card-trick scene and the very long getting-drunk-on-tequila scene.  The sex-obsessed Claude seems to exist to be the comic relief of the show but it’s all grubby school boy humour and pretty tiresome.  The quirky characters all talk too much and the climax of the show doesn’t work because there is no involvement with these people.

The director, Robert Jarman, keeps the play moving at a reasonable pace but is hampered by a very small touring set that is lost on the Q’s vast stage.  The actors perform as well as they are able to with unreal and unsympathetic characters.

Was this play trying to tell us something about the Australian character or something more profound?  It’s really not clear what the playwright was trying to say.  I lost interest in it very quickly.

Len Power’s reviews can also be heard on Artsound FM 92.7 ‘Artcetera’ program from 9am on Saturdays.
Posted by Canberra Critics Circle at 1:40 PM