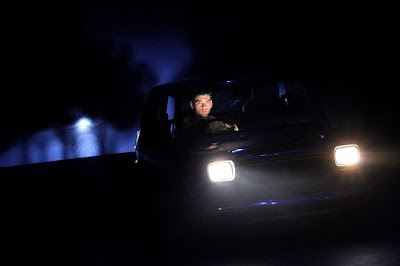 Stephen King once described horror as a door with something terrible waiting on the other side.  Some writers such as Lovecraft keep the door firmly closed, letting the reader's imagination do the work.  Other writers like Clive Barker swing the door open, confident that their creation is awful enough to horrify.  Stephen King described his own method as creaking the door open for a quick peek, getting the visceral horror of the jump scare but also letting the reader supply their own nightmare.

Ghost Stories subscribes to King's theory of horror, hiding its monsters and teaching us to shiver at what lurks in darkness.  When it opens the door completely, it is less effective, with all menace quickly evaporating in the harsh glare of stage light.  But the three tales of supernatural horror that make up this compilation are genuinely chilling, scary as much for what we glimpse as for what might be out there.

A title like "Ghost Stories" suggests a broad perspective, an attempt to sum up and explain why we are drawn to ghost stories themselves.  Sure enough, Ghost Stories provides this commentary in the person of Dr. Goodman (Stuart Brennan), the malf-mad skeptic determined to explain away the supernatural.  His lecture is the framing device for three ghost stories - the professor's favourite case studies - and as the night progresses we get more hints about the ghosts that may be pursuing Dr. Goodman.

Dr. Goodman explains the ghost story as guilt run amok, the conscience creating its own punishment.  A night watchmen who does not visit his comatose daughter finds something child-lkike lurking in a dark warehouse, while a teen driving without a license ends up trapped in his car, hiding from something in a dark forest.  As Dr. Goodman gleefully points out, we create ghosts because the uneasy mind is always fearful of retribution.

With League of Gentleman writer Jeremy Dyson co-writer alongside Andy Nyman, the show is heavy on humour, especially in Dr. Goodman's manic lectures.  Dr. Goodman is not afraid to bombard the audience with internet memes or to take a sly swig of booze.  The humour tenderises the audience, relaxing it just enough for the jump scares to have maximum impact, supporting the horror rather than detracting from it.

The three short stories are strong, with the opening night watchman story probably the most effective.  The setting and characters are staunchly English, and while the themes were universal this did feel like another country's bad dreams.  I would have been fascinated to see how these stories worked in an Australian setting, perhaps an encounter with a bunyip in the outback.  Heavy accents made the crackly radio voices in one segment almost incomprehensible, but for the most part the United Kingdom locale was a source of character and flavour rather than distance.

The show benefits from brilliant set design and lighting effects.  Tricky timing means that we are sometimes unsure whether we really saw something in the dark or imagined it.  Safe zones are created for the characters, and we tense up when characters stray from them.  A lot of the horror is in anticipation, for example when we are presented with a room full or mannequins or when a blanket in a haunted crib starts to rise of its own accord.  One of the plays even had a subtle smell effect, and I was genuinely unsure whether it was real or whether the mood was making me hallucinate it.

Where the show falters is in its coda, an attempt to fuse horror with humour that eschews the patient mood-building of the three stories for a bathos that falls slightly flat.  The resolution was clever, but so drawn out that it could not be chilling, a weak ending rather than a final shock.

However Ghost Stories achieves its mission, fusing humour and horror in a melange that mostly works.  It deserves particular praise for its adroit stagecraft, using sleight of hand in clever set and lighting to create the creeping atmospheric tension of a good radio play.  Ghost Stories is not only a spooky night at the theatre, but a compelling theory for why we are so determined to make ourselves afraid of the dark.
Posted by Canberra Critics Circle at 8:25 PM