Letters to Lindy by Alana Valentine 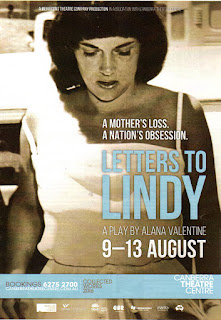 Letters to Lindy is both a moving commemoration of the short life and tragic death of Azaria, and a celebration of the remarkable steadfast resilience and human understanding of her mother, Lindy.

The opening night here in Canberra was a significant social and cultural event, with both the author and the play’s real life protagonist present and appearing on stage for the curtain call.  This was not just a performance of a play, but a happy/sad recognition of the proper conclusion concerning Azaria’s death and her mother’s terrible treatment by the Northern Territory’s legal system – and by the Australian media and so many individuals over such a long period since 1980.

There was at last a sense of relief when we heard the words of Coroner Elizabeth Morris on 12th June 2012: "Azaria Chamberlain died at Uluru, then known as Ayers Rock, on the 17th of August 1980.  The cause of her death was as the result of being attacked and taken by a dingo.  It is clear that there is evidence that a dingo is capable of attacking, taking and causing the death of young children."

As the ABC reported, the finding ended “decades of public speculation over the nine-week-old's disappearance”.  There were “four coronial inquiries, a murder trial and a royal commission into the case.”  And thousands of letters written to Lindy, ranging from the vicious and threatening to those of support, fellow-feeling, understanding and love.  The letters began almost immediately after the first publication of news reports, and were already so many by the time Lindy was jailed for murder, from 1982 to 1986, that a team of inmates formed to help her categorise and store them – until she finally sent 199 boxes to the National Library of Australia where staff awarded Alana Valentine a Harold White Fellowship in 2013, which resulted in this play.

The play was set as if in the lounge room in Mrs Chamberlain-Creighton’s home, where she is reading letters and stacking them in large cardboard boxes.  As she read silently, the letter-writers appeared saying out loud to her, with the voice, actions, body-language, looks and facial expressions to suit, why they are writing, what they think and feel about her, and telling stories of their own – including, among the more weird ones, of seeing her face represented in the branches of a leafless tree against the moon.  And then there was the one setting up a religious revival campaign at Ayers Rock where Azaria died.

Scenes, such as the original coroner’s decision, the prosecution and defence cross-examination of a witness, the judge’s summing up to the jury (which effectively led them to convict despite evidence that could in no way have supported that verdict ‘beyond reasonable doubt’) were played without set changes, as we understood we were seeing into Lindy’s memory of these events.

The first few letters we heard were horrible nasty accusations by people who assumed Lindy had murdered her daughter.  Then we were surprised as Lindy turned to us laughing to say she thought she should start with comic relief.  Immediately we responded, laughing along with her and beginning to realise that we were meeting a woman of great strength in adversity.

Jeanette Cronin’s performance showed her great strengths as an actor, representing a real life person present in the audience, and playing the subtleties of Lindy’s personality at all the critical points of her life, including the break down of her first marriage and the beginning of her second.  Cronin was equally strongly supported by her colleagues being so capable of shifting from character to character around her.  Lighting and especially the sound design nicely underpinned the symbolic moments, leading us to a warm ending.  Of all Alana Valentine’s research and selection of material, her choice to use a letter-writer’s lullaby for Azaria was the perfect way to leave us feeling both the sorrow for what was lost and a quiet pride in having understood Lindy Chamberlain-Creighton as she really is.

I hope this play will continue to be performed all over Australia so that all those letter-writers and their families down the generations will get to know and seek the truth rather than accept and attack on the basis of prejudicial beliefs; and all people will be confirmed for their empathy and desire to give support to those who are mistreated.