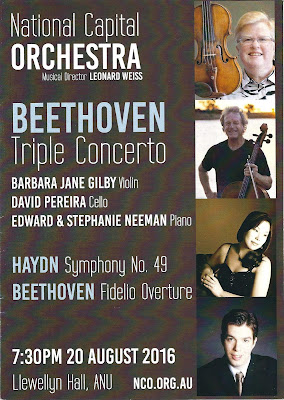 The National Capital Orchestra under the baton of Leonard Weiss presented a feast of fine music on Saturday night at Llewellyn Hall.

The ‘Overture to Fidelio’, from Ludwig Van Beethoven’s only opera, written in 1805, was played with great energy and warmth with fine work from the horns and an especially strong and exciting finale.

Joseph Haydn’s Symphony No. 49 ‘La Passione’ in F minor, written in 1768, was next on the program.  Discussion continues to rage over its popular title ‘The Passion’ with many thinking it refers to the sombre nature of the opening movement while others believe it has a theatrical origin.  The first movement was played with great control and feeling and contrasted nicely with the energy of the second movement.  The atmospheric playing of the third movement was the highlight of the performance of this work.

There was a change of pace with the next offering.  Martin Wesley-Smith’s ‘My Brother Jack’ from 1994 is based on snippets of the melody from the popular folk song ‘Frére Jacques’.  It was played with four hands on one piano by Edward and Stephanie Neeman.  This modern work is challenging but fun and the performers were as delightful to watch as they were to listen to.  The co-ordination between them as they played was extraordinary.

The major work of the evening was Beethoven’s Triple Concerto for cello, violin and piano.  It is the only concerto Beethoven ever completed for more than one solo instrument.  This popular work, written in 1803, was played superbly by the soloists David Pereira, cello, Barbara Jane Gilby, violin and Edward Neeman on piano.  The second movement where cello and violin weave around the melody was just sublime.  The orchestra accompanied the soloists with fine and sensitive playing.

The National Capital Orchestra has excelled once again with a well-played and enjoyable concert of nicely varied works.

Len Power’s reviews can also be heard on Artsound FM 92.7 ‘Artcetera’ program from 9am on Saturdays.
Posted by Canberra Critics Circle at 10:27 AM