The crackly voice of elderly  May Gibbs, creator of the iconic and beloved immortal gumnut babies, Snugglepot and Cuddlepie  reminds the audience of her childhood inspiration that gave birth to the delightful  adventures of the creatures of the Australian bush. Generations have come to love the stories of Snugglepot and Cuddlepie , and young children on their parent’s  or grandparent’s knee gaze wide-eyed at the illustrations as they listen to the exploits of the Gumnut Babies and the popular loveable Ragged Blossom, the pompous Professor Kangaroo, the matronly Miss Fantail and the smooth Mr. Lizard. The eyes widen in anxious concern at the nasty actions of Mrs. Snake or the Banksia Men and squeal with joy as Snugglepot and Cuddle Pie overcome all the perils of the bush.


CDP’s presentation of the stage adaptation of May Gibb beloved tales is no less delightful, vividly brought to life and colourfully realized in Imogen Ross’s gumleaf setting and Matthew Aberline’s splendid costumes. Adapters Eva Di Cesare, Sandra Eldridge and Tim McGarry have been faithful to May Gibbs's creations and have woven a fun-filled, fifty-five minute adventure that had the young children rapt in wonder as their beloved flora and fauna sprang to life upon the Canberra Theatre stage.


Monkey Baa Theatre Company’s  production is the perfect illustration of first class children’s theatre.  Bright, energetic, colourful and filled with clever physical business and lively performances by the small cast, it sweeps the audience along as Snugglepot (Nicholas Hiatt) and Cuddlepie (Thomas Pidd) set out to find a human. Snugglepot the intrepid cajoles the more cautious Cuddlepie to join him, and he finally acquiesces, but “at a distance”. Like all good tales, Gibbs’s characters embark upon a quest. Along the way, they encounter new friends to join them, and must escape the perilous pursuits of the slithery snake (Lucy Goleby) and the bumbling Banksia Man (Jake Lyall). With the aid of Mr. Lizard, Ragged Blossom, Mr. Frog and Miss Fantail, Snugglepot and Cuddlepie come across a human rescuing Mr. Possum from a trap. And therein lies the moral of our tale. Just as there are the good and bad members of the flora and fauna race, so too are there good and bad humans who live upon the earth. With the aid of good friends, the bad can be vanquished and good will triumph. It’s a moral that even the youngest five year old as well as the oldest ten year old and their families can understand.
Susanna Dowling directs with flair and imagination. The children delight in the playful opening wooden sword combat between the two gumnut babies and there is much sliding and swinging on the central see-saw branch. Goleby and Lyall take on the many other roles with lightning costume changes. There is tumbling and falling, running and bumping and Goleby  in both her roles as the captured Ragged Blossom and the vanquished snake.is hauled across the floor by her legs into the wings

Exquisitely staged and performed with gusto and fun by the versatile cast, the production exudes every ounce of adventure and charm that have made May Gibbs’s stories such a treasured collection on generations of bookshelves. This production is sheer joy and tells its tale for all to love.

Above all, the telling of the tale is done with integrity, understanding and a delicious insight into the imaginative world of the child. It is a production to appeal like May Gibbs’ tales to all ages for all time. It is a quintessential Australian folk lore, and Children’s Theatre at its best. 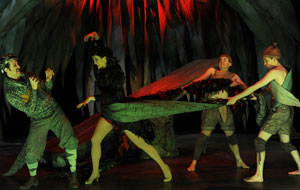