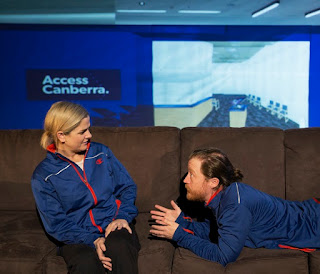 Anyone who has been to Access Canberra has suspected that it is our planet's local branch of purgatory, and writer/director Julian Hobba confirms the presence of the diabolical in unlikely places in The Slip Lane, a fusion of Gungahlin-centric ennui and demonic plots for power.

The play starts off as a satire of Gungahlin life with a strong sense of place, throwing two tracksuit wearing cranks together on an Access Canberra sofa.  Lost soul Matthew (Dene Kermond) is obsessed with a Slip Lane to ease traffic congestion, while soccer mum Missy (Clare Moss) wants the government to do something about the dangerous animal that appears to be prowling around her property.  When they are rebuffed by the bored, sneering staff, the desperately lonely Matthew uses this as a chance to get closer to the tightly wound Missy, offering to join her on a series of nocturnal stakeouts.

From there the play establishes itself as character-driven, low-key comedy of manners, an attack on the stereotypical soullessness of Canberra's brand new suburbs dominated by McMansions and carpet bagging franchises.  We settle in for a gentle coast down this highway before the play takes a sharp U-turn.  It turns out there really is something out there stalking the open spaces of Gungahlin, the charismatic Demon Prince Asmodeus (played in alternation by Nick Delatovic and Emma Strand), who has his own plan for the outer suburbs as ambitious as anything dreamed up by Walter Burley Griffin.

With different direction, we would question whether Matthew's conversations with this demon are hallucinations, but the overpowering presence of these scenes encourages us to take them at face value.  Asmodeus is flamboyant, likeable and genuinely funny, and Delatovic and Strand mirror each other brilliantly as the same character, playing the same song on a different instrument.  The demon is given further pizazz by Imogen Keen's arresting costume work, although the voice modulation for some of Asmodeus' dialogue does garble the articulation of the performers.

The play then becomes a literal deal with the devil story, with Asmodeus becoming Matthew's mentor in a broad satire of politics and the media.  Matthew dons a yellow superhero costume and becomes a combination of public spectacle and activist, simultaneously losing his dignity and entertaining increasingly deranged ambitions.  In the process, the subtle commentary on Gungahlin was lost.  Matthew and Missy's growing dependence on each other was also thrust into background, and when they explode into conflict - complete with a convenient Chekhov's gun - it feels too abrupt to be believable.

Hobba does have one very clever plot twist in store, a whammy that shows the potential in Matthew's story arc, but what should have been a powerful revelation is inadequately set up and then weirdly dismissed as an afterthought while the characters throw themselves into a climax that would not be out of place in a superhero movie.  The play is unaware of its own strengths, relishing its weird moments but neglecting the elements of the script that have the potential to be brilliant.

With an excellent cast and genuine potential in the script, The Slip Lane is a play I wanted to like more than I did.  With Hobba acting as both writer and director he is able to keep a tight grip on his vision - and Hobba has adopted dual duty more successfully in productions such as Bartleby - but here the play needed a director with a better grasp of tone to balance the play's contradictions.  Both delicate and brash, The Slip Lane sets off into interesting territory but gets lost along the way.
Posted by Canberra Critics Circle at 10:31 PM