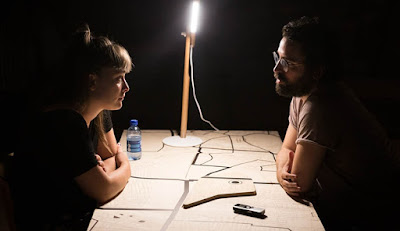 Aleppo A Portrait of Absence.

The tragedy of Aleppo is all to plain to see. Horrific scenes of death and destruction are beamed into living rooms around the world as the ten year war continues and the struggle between the revolutionary forces and the Assad regime takes its terrible toll on lives and property.  Aleppo A Portrait of Absence at Adelaide’s Queens Theatre is a simple, sincere and non-embellished account of the impact on the devastation on innocent people’s lives and the cruel displacement that drives them from their homes and the city of their birth.
A small group enters Adelaide’s oldest theatre, now a large shell of empty rooms, converted into  theatre spaces or installations or events in the cavernous rooms, Before us is a large street map of Aleppo, Syria’s largest ancient city, once the thriving centre of diverse religious and ethnic groups, living in harmony. Now it lies in ruins, destroyed by the furious conflict between the revolutionary guard intent on establishing democracy and overthrowing a dictatorial regime. The world knows too well the consequence and the price paid.
Jigsaw pieces are attached to the map and each member of the group is invited to choose a piece. I take Number 1 and move with others to a table at the entrance to another large space. We aare handed a recording device that correlates with the number of our jigsaw piece and move into the large space to find the table and an outline of our jigsaw piece. A voiceover tells of the loss of home and family and the desperate search to re-discover the places of his childhood, now lost in the rubble of his birthplace. Only the cherished memories remain.
An actor comes and sits opposite me. Without introduction he commences his learnt account of one Syrian student’s experience, of the apartment on the regime held part of the city that served as a meeting place of all people who gathered to support each other and enjoy their company. His account of the shifting tide of allegiance and the bitter divisions that gradually emerged between regime and revolutionary supporters is intimate and focused, his gaze at times direct and sometimes wandering as the tears well and he turns slightly aside. He tells of the sniper deaths of his brothers and his innocent friend, caught in the cros fire of this terrible struggle. The futility of the battle against the regime is palpable. The plight of Sali, a young economic student, a saga of loss of innocence, of opportunity, of home and family that has forced him to flee to another part of Syria to find consolation and a future. At other tables the participants in this short performance learn of other lives caught up in the regime’s ruthless suppression of the rebels’ struggle.
The actor hands me the recording device and invites me to send a message of support by describing what connects me to place. He then rises and leaves the room, at no time revealing his true identity. He is merely a conduit, a medium for on person’s experience. Unlike the film For Sarma, itt is removed from the direct account of his individual, who has lived through the conflict. It is an actor’s account, told with feeling and understanding, but removed from the real experience.
I applaud writer Mohammad Al Attar and director Bissane Al Charif’s intention to offer an intimate, non sensationalized account of the suffering and loss of ordinary, innocent and good lives in war torn Aleppo. Is this a story to be told by an Australian actor with no direct experience of the situation in an intimate setting that requires utter belief by the listener? Would my response have been different had I been told this account by a refugee from Syria. Undoubtedly. Is it too much to expect? Possibly. Would that have been gratuitous. Hopefully not. Aleppo A Portrait off Absence is theatre in education, a device to instruct and enlighten. I appreciate its intent. I applaud its concept. I question its contrivance. I left the room, returned the recording device and walked into the night air, more aware of one person’s story but less moved by an actor’s  performed account than by the horrific images on  my living room TV.