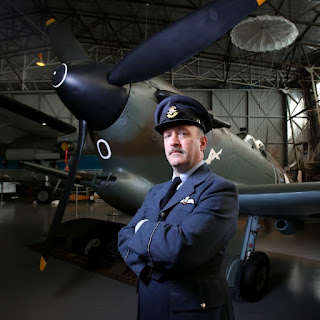 Eighty year old Peter Walker sits in his armchair at the Nursing Home and remembers. He remembers those bloody wonderful years as a spitfire pilot and the Battle of Britain. He remembers his wife Alice who died of cancer many years before. And he remembers his daughter Amelia who left home twenty seven years ago and has not been heard of since.
Nichols Collett’s Spitfire Solo premiered in 2011 at the Eastbourne Festival with Collett in the role of Peter and two actresses playing Dorota the Nursing Home carer and Amy, the granddaughter who arrives unexpectedly to find her grandfather and reunite Peter with his daughter and her husband.  At the Adelaide Fringe, Collett plays all the roles, seamlessly and engagingly under Gavin Robertson’s carefully staged direction. Collett’s performance is assured and he transitions effortlessly and with perfect versatile ease into the roles of the young spitfire pilot, his carer, children at a local school where he agrees to talk about his wartime experience, a burley private investigator, engaged to find his daughter and granddaughter Amy.
Past and present merge in a wave of nostalgia for a past when ordinary men were called on to perform extraordinary tasks. Walker, though wounded, survived where many died. The futility of war and the loss of so many fine young men lingers in the memory, that silent receptacle of vanished experience. The result is a performance of exceptional engagement. Collett has written a play about one pilot who played his part as he was called on to do. It is the unassuming humanity of an ordinary human being that captivates and instructs us in the nature of humility and bravery.
From the opening screening of the beginning of Battle of Britain to the final moment of Peter’s descent into Adelaide to meet his estranged daughter Spitfire Solo keeps us absorbed in Coillett’s simple tale of one man’s life. The challenges of wartime action and life’s journey are framed by character and survival. Peter Walker’s life is such an example of courage, a simple man who lived, loved, suffered and survived. The play’s potency is in the audience’s wrapt involvement.
Using film footage, songs and music from the wartime era, Collett and Robertson build the atmosphere and then allow Collett’s excellent and entertaining performance on the intimate Bakehouse Theatre stage to keep an audience totally enthralled.