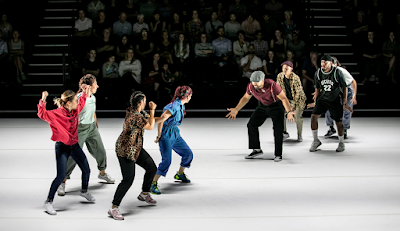 What struck me most when watching Between Tiny Cities and Two Crews, both choreographed so slickly by Nick Power was the joyful and uplifting spirit of happy hip hop. Between Tiny Cities displays the technical brilliance of Erak Mith and Aaron Lim. Two Crews features an all female crew from Paris playfully tauning, tantalizing and challenging the mainly male Riddim Nation from Sydney. Two Crews is classic hip hop, drawing on the rituals and traditions of street gang breaking, accompanied by Jack Prest’s percussive composition that keeps the beat, builds the tension and punctuates the dance with surprising rhythms.

Hip hop is the art of bodily isolation, Hands wave while elbows twist, hips gyrate, feet slide. legs turn and the body speaks the staccato  language of  the dance. It pulsates with attitude, delighting in the challenge of the combat. Defiance in approach, mockery in retreat, the women of Lady Rock from Paris take the space. They glide and vibrate, hitting the air with fearless fervour. Each dancer enters the space at times waving, at times advancing towards the men from Riddim Nation who stand on the edge of the square floor to await their turn within the space. The battle is on. And the men take their turn upon the floor. Hip op is pure energy, as though a lightning bolt of energy blasts through the veins obsessing the dancer. Sheer magnetism captivates the audience as the male dancers respond in this hip hop call and response, The playful sexuality becomes a battle of the sexes, a competitive game of hip hop moves. Male and female play off each other, testing the other to succumb. The women hold their own, feisty and dominant. The men respond, using height and closeness to intimidate to no avail. It is all in good fun and the energy builds as the contest dissolves into a shared enjoyment of the game.

Two Crews is an uplifting celebration of ownership, a pride in the skill of the dance and a respect for all members of the tribe. It is not the creed of violence or arrogant oppression, but the dance of a new generation who find purpose in the high octane moves of the hip hop. Whether as a solo demonstration of flexible physical manipulation or a cheeky rivalry or an ensemble display of hip hop  dance steps Two Crews like so many dance genres before it is the art form of a new generation, explosive, dynamic and joyous in its proud liberation. It proudly takes its place at the Adelaide Festival alongside the Lyon Opera Ballet’s Trois Grandes Fugues from France, Lloyd Newson’s Enter Achilles by DV8 Physical Theatre from the UK’s Ballet Rambert and Sadler’s Wells, Black Velvet from the USA and Brazil, and the accompanying hip hop dance performance Between Tiny Cities from Australia and Cambodia. With the undeniable voice of a young generation, Two Crews asserts its place in the theatre of dance and the stirring spirit of hip hop.

Posted by Canberra Critics Circle at 11:32 AM