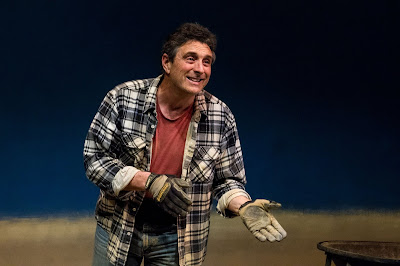 One-person plays seem to be in vogue at present. In the last month Canberra audiences have had the opportunity to experience at least three examples, with more promised later in the year.

Melbourne playwright, Joanna Murray-Smith is a mistress of the genre. Her plays are performed around the world. Indeed, “American Song” was written for the Milwaukee Repertory Theatre, which had already presented another of Murray-Smith’s plays, “Bombshells” with Caroline O’Connor in 2010.

“American Song” premiered there in 2016 with actor James DeVita playing the role of the quiet American, Andy, performed in this production by Joe Petruzzi. Despite its name, “American Song” is not a musical. Unsuspecting audience members might be surprised to discover themselves privy to an unsettling examination of gun violence,  a scourge that is inflicting contemporary America.

As the audience enters the theatre, Andy, (Joe Petruzzi) is discovered in a bucolic setting, resting from his task of building a substantial stone wall. As the lights go down he notices the audience, and as he goes about his task, confides details of his child-hood, of growing up, of meeting his future wife Amy. Between setting stones, he talks of the birth of his son, Robbie, of the pleasure he and Amy derived from Robbie’s growing up, and ponders on the difficulties of parenting in a perilous world.

On the surface this family appears to live in a perfect world, unremarkable yet admirable, inspired by the Walt Whitman poem “Leaves of Grass”. It’s only when Andy talks about his career, and confides details of an extra-marital affair, that cracks begin to appear and threaten the perfection.
However, it’s not the affair that shatters their world. It’s something much more sinister, pervasive, peculiarly American, but every parents nightmare.

A brilliant story-teller, Murray-Smith, captures her audience early with titillating details of an ordinary life until just as one begins to wonder where all this is leading, she reveals the shattering denouement, made all the more shocking by the recognition of its familiarity.

Joe Petruzzi’s portrayal as Andy is mesmerising. As carefully as he selects and sets each stone for the fence that, he explains, is his attempt to leave something of permanence in an increasingly impermanent world, he subtly changes mood and pace with each revelation.

Tom Healey includes a subtle soundscape by Patrick Cronin to enhance his admirably detailed direction, taking full advantage of the opportunities offered by Darryl Cordell’s surprisingly substantial setting of a near-completed stone fence and curved painted cyclorama background, to support Petruzzi’s portrayal by keeping the stage visually interesting throughout the duration of this deeply moving production.