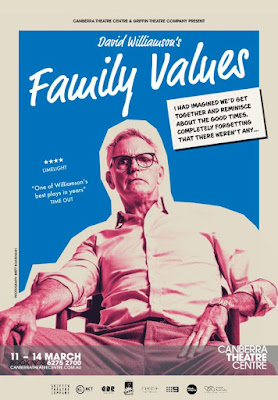 
In ‘Family Values’, David Williamson gives us an uncomfortable evening of anger mixed with comedy.  His target is the immigration policy in this country on the detaining and treatment of refugees and our complacent attitude that allows it to happen.

For his birthday, retired federal court judge Roger, played by Andrew McFarlane, is planning on a low-key celebration with his wife and three children.  What he gets is anything but as one of his daughters, a left-wing activist, brings home a new same-sex partner - an asylum seeker on the run from Nauru.  Another daughter and her female partner are Border Force officers and their very religious son frowns on same-sex relationships.  The stage is set for the raising of old resentments as well as a clash over current political and personal values.

David Williamson excels at this type of comedy-drama, taking character types we can all relate to and putting them at odds in a domestic situation over a current political issue.

Performances of the cast of seven are very strong.  Andrew McFarlane is very funny as a man struggling to be the head of the family while being swamped by the strong personalities around him.  Belinda Giblin is excellent as the wife and mother who finds an inner strength and purpose she never knew she had.

Jamie Oxenbould is pathetically funny as the religious Michael with a continuing love of Lego.  Bishanyia Vincent as Noeline and Ella Prince as Emily, the Border Force officers and partners, give fine contrasting characterisations, one strong and forthright and the other not as weak as she first appears to be.

As the Nauru refugee from Iran, Saba, Sabryna Walters delivers the most uncomfortable speeches in the play with conviction and skill and Danielle King as her partner, Lisa, gives a strong in-depth performance as a well-educated and politically committed woman.

The play has been well-directed by Lee Lewis who keeps it all moving at a high energy level with well-rounded characterisations on a simple but attractive set by Sophie Fletcher.

This is a very funny play with a strong message.  The character types and their conflicts are a bit contrived and the overt delivery of political messages gets a bit wearing at times but overall this is an enjoyable swansong from our most prolific playwright.