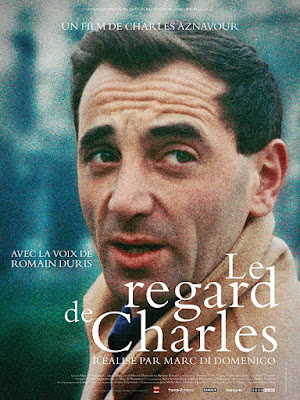 Previewed by Len Power 1 March 2020
Charles Aznavour sang in five languages, appeared in at least thirty films, wrote somewhere in the vicinity of a thousand songs, and sold hundreds of millions of records worldwide.  In 1948, Edith Piaf, of whom Aznavour had been a protégé, gave him a movie camera.  Until 1982, he shot hours and hours of home movies.  Aznavour died in 2018 at the age of 94 and was given a state funeral in France.

It appears that Aznavour gave the director of this film, Marc di Domenico, access to his personal film collection, suggesting he do something with it.  With a voice over by Romain Duris as Charles Aznavour, the completed film charts the period of his career when he was touring the world for his singing career.

Early in the film, Aznavour states that while we were looking at him, we were not aware that, through his camera, he was looking at us.  The films have been expertly edited, giving quite an insight into the man himself and what he observed and absorbed about life around him.

He is quite candid in the film about his failed marriages to Megan Rugel and Evelyn Plessis but his third marriage to Ulla Thorsell endured until his death.  As he once told a newspaper reporter, “For the first marriage I was too young; the second one I was too stupid; the third time I was right on.”  The sadness of the loss of his illegitimate son Patrick to drugs is covered in the film as well.

There are several high points of interest in the film.  Candid shots of Edith Piaf and the actress, Anouk Aimee, show their charisma but their real selves appear to be strikingly different to their usual public personas.

Film from backstage at Aznavour’s concert performances crackle with electricity and there is a wonderful jam session where he is playing piano and scat singing.  Whenever his well-known songs appear on the film’s soundtrack, you feel like they have been with you forever.

Unfortunately the narration as translated into English comes over as rather pretentious.  These are words about feelings and they don’t convey that in literal translations.  I’m sure it would’ve sounded so much better if you could just understand it in French.

Nevertheless this is an absorbing look at the man and his life are in the period when he was making these films and there is that wonderful music on the soundtrack to enjoy.