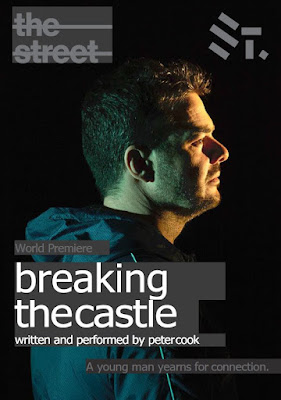 There have been a lot of plays and films about addiction but it’s rare to be able to really understand the personal hell of people caught up in this situation and the difficulty of trying to break free.

Peter Cook’s play about addiction and recovery, ‘Breaking the Castle’, succeeds because of the quality of the writing, the extraordinary performance of Peter Cook himself and the strong production by the director, Caroline Stacey, and the technical team at the Street Theatre.

The writer and performer, Peter Cook, graduated from the Victorian College of the Arts in 2001.  He has worked extensively in theatre and film and has also worked as an arts educator across the country for major theatre companies, writing, devising and directing numerous plays with students.

In ‘Breaking the Castle’, Peter Cook plays Dave, a young man rushing headlong towards oblivion in a haze of drugs and alcohol.  An opportunity to change presents itself in a rehabilitation clinic in Thailand but redemption comes at a price.  Dave must confront his personal demons head on and learn that, even in recovery, the past will always be there waiting to claim him again. 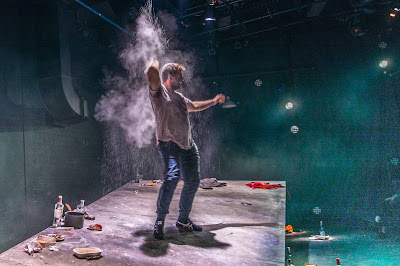 Peter Cook clearly understands the type of man he is portraying and his knowledge of addiction and the process of recovery give the play an ultra-realistic edge that is very involving.  His is a marathon performance that never falters.  Speaking at high speed and swapping quickly between characters involved in his life, his clarity of diction and depiction of changing emotional levels are excellent.  The most extraordinary aspect of his performance is the change from an out of control addict at the start of the play to a man who has finally found a fragile type of peace within himself through recovery. 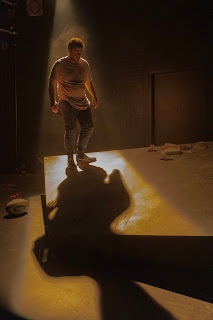 Caroline Stacey’s direction of this play and her overall concept for the production is masterful.  She has ensured that the pace and depth of performance, physically and verbally, is believable at all times.  The angular setting by Imogen Keen is aesthetically pleasing as well as practical.  The complex lighting by Gerry Corcoran and sound by Kimmo Vennonen adds immeasurably to the atmosphere, especially in the sequences showing the actor deep in the throes of addiction.

This is a play that gives a very real insight into the problems of addiction through an involving journey with an ultimately likeable and recognizable character.  It’s also an exciting theatrical experience.

‘Theatre of Power’, a regular podcast on Canberra’s performing arts scene with Len Power, can be heard on Spotify, ITunes and other selected platforms or at https://player.whooshkaa.com/shows/theatre-of-power.
Posted by Canberra Critics Circle at 9:56 AM