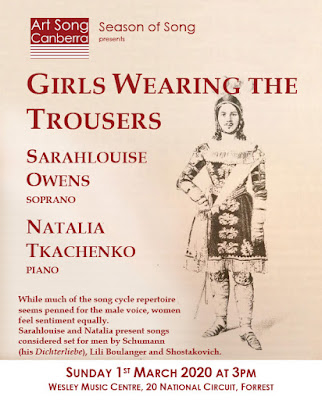 Gender bending in theatre has become trendy of late with women now taking on classic male roles like Richard III and Hamlet and we’ve recently seen a male giving his Buttercup in “HMS Pinafore”.  In music there’s a vast repertoire of songs that have been traditionally denied to women and vice versa.  Soprano, Sarahlouise Owens, in her concert, “Girls Wearing Trousers” breaks through that barrier and presents a range of songs normally sung by males.  This was not being done as a feminist diatribe, she said in her introduction, just levelling the playing field.

Sarahlouise Owens has worked extensively in Europe and is a graduate of the ANU School of Music and Royal Northern College of Music, Manchester.

Her accompanist, Natalia Tkachenko graduated with honours from the Moscow State Institute of Music and worked extensively in Moscow, France, Germany and South Korea before residing and working with the ANU School of Music in Canberra.

The first half of the concert consisted of the complete twenty Dichterliebe songs by Robert Schumann.  Composed in 1840, this is the best known of Schumann’s song cycles.  The words of the songs are from the Lyrisches Intermezzo poems of Heinrich Heine.

Striking the right emotional level from the first song, Owens’ performance of this work was highly memorable. The songs range across various emotional states and she gave readings of great depth and power where appropriate and contrasted this with sensitive and delicate singing for the quietly emotional songs.  Her clarity of diction was especially notable in the swiftly sung song number 3, “The Rose, the lily, the dove and the sun”.

Boulanger’s “Clearings in the Sky” songs are hauntingly beautiful and were beautifully sung with a controlled emotional intensity.

A performance of three of Shostakovitch’s “Satires Opus 109” followed and their humour provided a delightful change of pace.

Natalia Tkachenko’s accompaniment for the different styles of all three composers was masterful.

The finale of the concert was Alexander Alabiev’s beautiful song, “Solovei” (Nightingale).  It was sung with clarity and great feeling by Owens, bringing this fine concert to a close.

The emotional content of these songs clearly applied equally to both sexes.  Sarahlouise Owens showed that it was entirely appropriate for either gender to sing them.

‘Theatre of Power’, a regular podcast on Canberra’s performing arts scene with Len Power, can be heard on Spotify, ITunes and other selected platforms or at https://player.whooshkaa.com/shows/theatre-of-power.
Posted by Canberra Critics Circle at 2:41 PM