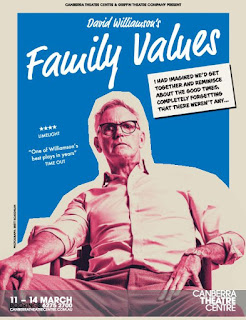 In Family Values, David Williamson has written a masterwork.

The Griffin Theatre production, in design and quality acting, picks up and runs with every opportunity the script provides.  It’s the Australian political satire I have been waiting for.

Going beyond satirical comedy, the Collins family “celebrating” Roger’s 70th birthday becomes a metaphor representing Australia, asking each of us what has happened to our humanitarian ideals.  Have we let the Fair Go go?  Can we bring it back … now … please!

Let me make it plain that my judgement on the quality of the play is not because I agree with Williamson’s stance on the issues.  It is because the work shows such expert control of all the elements of great drama.  This places David Williamson in the league alongside Shakespeare in his comedies like Much Ado About Nothing, George Bernard Shaw in his Major Barbara, and the serious drama of Henrik Ibsen in his An Enemy of the People.  The other modern Australian playwright also of special note is Nakkiah Lui in her Black is the New White (reviewed here March 2018).

The essence of achieving maximum effect is economy and structural complexity made to seem simple.  Though this may sound like the worst kind of public service doctrine, this is how it works:

Instead of his standard two-act play with interval (that is exposition followed by climax and denouement in the second half), Williamson has “gone modern” with a 90-minute tightly structured beginning-to-end story;

The story is apparently simple – Roger and Sue are waiting, bickering, for their children to arrive; Lisa explodes onto the scene with Saba, who uses an Anglo name as a cover; Michael belligerently arrives, and expounds on his religious conversion; Emily arrives hesitantly with her over-the-top partner Noeline; Saba’s illegal status is revealed; Sue concocts a solution to save Saba from being returned to Nauru.

The structure is spiral, reminding me of the image of a species’ genome, with its four letters of code interacting in unexpected and seemingly unpredictable ways, yet creating a complete life-form.

But in this species, which I could call Australianus politicus, there are seven code letters, each switching different sets of genes on or off.  But genetic diversification is how the system learns and changes.


Justice Collins begins with black-letter-law turned on.  At the end he turns it off.


Lisa begins with risk-taking radical political activism, but finally accepts that there may be more subtle and softer ways of relating, even to authoritarian governments –  and her brother and sister.  Absolutist moral positions may be self-defeating.


Michael, too, discovers that though his obsessive behaviour may have given him purpose as a child, in adult life his new-found obsession with Pentacostal Christianity needs to be thought through carefully.  Like his sister Lisa, he finds taking conventional absolutist positions fail when he has to test them in the face of the reality of Saba’s fate.  Christian love is about compassion, never obsession.


Emily says “Never be the third child”, meaning that she began believing it was natural that she always would be dominated, not only by Lisa, Michael and her ex-husband, but now by Noeline in a gay relationship.  By the end she has learned to stand up for herself, against Noeline’s black-letter-law view of their work for Border Force, and probably against their proposed marriage.  Self-realisation is the gene she turns on.

Noeline’s “Commanding Officer” gene is highly active until her environment changes irrevocably.  I’m not entirely sure at the end of the play whether her acceptance of the inevitable failure of the Border Force rules is a permanent switching off of that gene (when her Minister Mr Duck-it announces on Radio National that an un-named officer made a mistake, so he will treat Saba’s case as one-off, and allow her to stay).  I guess Emily will have to make that judgement “going forward”.


It is Sue, who begins as mother-at-home to Roger’s man-always-at-work (until he retired and starts to get under her feet) whose practical management gene never changes.  She has always had to understand how to keep everything working in the family.  Saba is now in the family, and she works out what Justice Collins, ret. must say on national television about Saba’s case.  She hates the phrase “going forward”, so tells him that “in the future” their marriage is over unless he does the morally right thing.


Saba’s switched-on gene is truth – the proper understanding of the core elements of Islam, the denying of women’s rights by the mullahs when they arrested her for protesting because they made it law that women could not practise medicine, after she already had top results in her first two years’ medical training.  In her life-threatening escape, and despite her treatment by Australia, as morally evil as her treatment by Iran, her dream of life as a mother and a doctor – of compassion and science – remains undeterred.

Sabryna Walters’ performance of Saba’s major speech is quite extraordinary.

You may think from my description that this could not be a comedy.  But that is where David Williamson’s imagination shines.  He has written in a Playright’s Note:

From my earliest days as a playwright, as in Don’s Party and The Club, I’ve loved
to put people in the same room who are obliged to be together, but shouldn’t be
together, and don’t want to be together.  Humans being humans, this inevitably
results in drama and comedy.

It was Don’s Party and The Club, both famous for their satire of politics in their own ways, that I first thought of, before reading this Note.

I think Family Values is more powerful and more comprehensive, and the comedy more telling.  I am just a year older than David Williamson.  I have been waiting for this play since The Coming of Stork in 1970.  I have reviewed 12 of his plays in the past 24 years, including Don’s Party and Heretic in 1996, Face To Face in 2000, and what he claims will be his very last play, Crunch Time, in February 2020.

I find it hard to imagine Playwright David Williamson, retired.