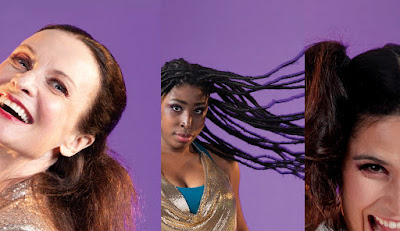 Behind the smiles and beneath the spangles lie the tears and the fears, the dreams and the disappointments and intimidating Dance Teacher Pat (Mitchell Butel) driving his young teenage dancers on, In a dance studio in middle America, aspiring 13 year old dancers strive to win competitions that will eventually lead them to the ultimate prize trophy. Six adolescent girls and a solitary teenage boy prepare Dance Teacher Pat’s Gandhi inspired number in Jonathan Oxlade’s dance studio set of mirrors, barres and a locker where dreams are revealed, fears are exposed, and friendships are tested. It is a harsh and bitter world of struggles and rivalries, of failures and successes. It is the studio of life where young girls are tested on the threshold of their adult lives.

Their present as Ashlee (Amber McMahon) so graphically  describes in a  monologue that unleashes the demon  within is their future in the moment, the person they are bound to carry into their future lives. For Ashlee it is fearless defiance. For Teacher's Favourite(Amina (Yvette Lee) it is the confidence to grasp the opportunity in the instant of Zuzu’s (Chika Ikogwa)collapse of confidence. Maeve (Rebecca Massey) grapples with her dark secret that will inform her future, Only Connie (Emma Harvie) assumes the role of arbitrator. Luke (Tim Overton) assumes the part of token male in a studio of girls, but in a conversation with Zuzu he is obviously curious to find the answers to his bewildering questions about love and sex.

Barron’s characters are real and personal. Their lives are complex and the adults Dance Teacher Pat,”I want to get it right” and Zuzu’s  ambitious stage mother Vanessa (Elena Carpetis) complicate rather than appease their young charges’ fears at the bewildering verge of adolescence and puberty. Savage’s direction is tight, She navigates the balance between showbiz artifice and teenage angst. Barron has purposefully cast older women in the roles of the young girls in the belief that the personalities forged at the cusp of adolescence will continue to be revealed in adulthood.  Savage has cast her actors well according to Barron’s insistence on older women in the roles, rather than actors in their twenties to play 13 year olds. l, and the actors handle Larissa McGowan’s choreographed routines well.
A long locker room scene between Connie, Sofia (Tara Morice), Ashlee and Maeve lapses in believability as actors appear to drop character to present the older woman’s perspective. Perhaps this is intentional and perhaps I am being ageist or perhaps the scene is just too long but for a while I ceased o believe the 13 year old and be puzzled by the emergence of real life actor.
Dance Nation, though well produced, convincingly performed and obviously entertaining, echoes in part the legacy of Fame or  Chorus Line though without the musical numbers, or many other works that depict real life behind the top hat and tails or glittering gold lame. Barron focuses on the plight of the dance studio hopefuls, in a play that is arresting and relevant.  Whether this American Pulitzer Prize finalist warrants a place in a ground-breaking Adelaide Festival programme – of that I­’m not so sure.
Posted by Canberra Critics Circle at 11:27 PM