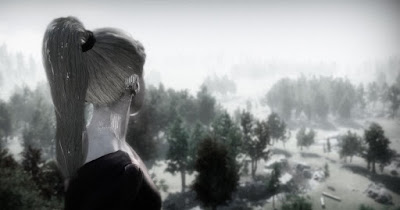 If art has the power to art your view off the world,  Michel van der  A’s interactive VR experience has the power to hurl you into a different universe.  His interactive VR experience transports the virtual reality traveler to an entirely new dimension. Both a composer and a video artist van der A has constructed an amazing journey through a natural virtual world. Singer Kate Miller-Heidke is his Siren, guiding and luring into the different landscapes with her enticing song. Thus begins the adventure into a new and amazing aural and visual artistic expression. It is the wow factor of the future, a mind-blowing reality of an unreal immersion in sight and sound. 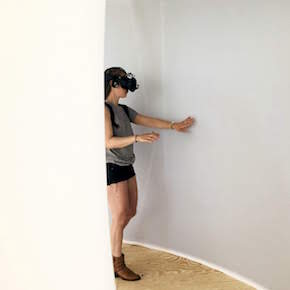 Only one person at a time can travel through the corridors, created in the Hetzel Building of the old State Library of South Australia. I am guided through the door to the edge of a dark space, offered instructions and then a video recorder is placed on my head. “If you feel that you need to leave before the fifteen minute experience is over, simply raise both arms in the air” I am gently told by the attendant. The VR is adjusted to focus on the word EIGHT and switched on and a woman appears before me beckoning me to follow. Suddenly red blossoms whirl above my head, swirling as if swept up by the wind and the woman and the crimson ribbon of blossoms leads me on. Figures lurk ghostlike in the shadows beyond the white walls and the woman morphs into another, looking strangely like Kate Miller-Heidke whose seductive song leads me forward along planks and through large boulders that float past. The song awakens the dream.

“I sigh
I hear Time falling
my breathing happens
It’s not mine.

She leads me on to the edge of a cliff. I reach out and touch a rail. But not the rail she leans upon and we gaze towards a vast valley of pine trees. A moment of vertigo and then wonderment at this vast scene reaching far beyond my reality. I turn and before me a young girl stares ahead and beckons me to crawl and follow her. Canvas walls fall enclosing us in the small space and I fix my gaze upon the girl’s expressionless face as the song continues. Her large brown eyes shift and the song of the Siren falls through time to no particular point in time within the never ending cycle of our life. The sides of the wall lift, the girl vanishes and the woman at the start appears to lead me back, out of this dreamworld, this transformative and transportative state into the real world where the attendant removed the video recorder and I emerge again into the light, where life continues as before, but I remember vividly the world I left behind and I am changed.
If art’s true nature is to change the way we see our world and the  way we live within it, then Eight and Kate Miller-Heidke’s  hypnotic and mesmerizing rendition of the song Time Falling  invites us into the fusion of art, music and technology in this digital display of magic. It is a future that awaits everyone. As Hamlet says to Horatio, “There are more things in Heaven and Earth Horatio than are dreamt of on your philosophy.” Michel van der A’s exploration of a brand new world of art is proof enough.