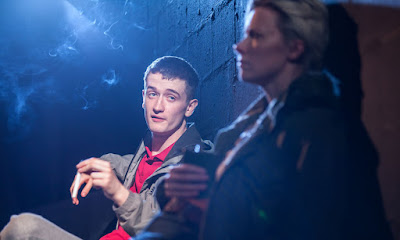 It is not at all surprising that an audience would spontaneously leap to their feet to applaud Traverse Theatre Company’s production of Kieran Hurley’s Mouthpiece. Set in a poorer part of Edinburgh Hurley’s play paints a bleak and stark portrait of poverty and youth unemployment, of class and the haves and the have-nots. Declan Swan (Angus Taylor) is an unemployed teenager from a dysfunctional home and doomed to a life of rejection.  Libby is a playwright, once feted as a rising star but down on her luck after years of obscurity and rejection. Two lost souls in search of meaning to their lives are destined to meet on the crags . Libby, aged 41 and living with an uncaring mother stands at the precipice prepared to fall to her death. She is caught from behind and pulled back by Declan, who has been sitting back from the crag sketching a portrait of his younger sister.


In the midst of crisis Libby seizes opportunity. She recognizes Declan’s artistic talent and at the same time the possibility of reviving her playwrighting career by writing about his unfortunate life. Declan, desperate to believe that “everything’s going to be alright” strives to reach out to a better life. Hurley’s observation on the shackles of class and poverty provides a platform for a relationship upon the metaphorical precipice of doom.


Throughout the play, Libby breaks the fourth wall to offer a dissertation on the structure of playwrighting, its arc and rising development of action and character. It is the source of an inevitability in the relationship between Declan and Libby as property rights thrusts both characters into destructive conflict. In a final scene, predicted by Libby during her explanations to the audience, Declan arrives at the opening of LIbby’s play, based on his story, to claim his right. The tragic realization by Declan is the knowledge that “everything’s not going to be alright” and an audience is left to contemplate the tragic consequence of class and poverty. 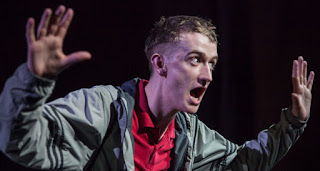 Shauna Macdonald as Libby and Angus Taylor give riveting performances as a playwright struggling to revive her career  and a lost soul, uneducated, subsumed by low self esteem. Only through his art may Declan hope to find a mouthpiece for his predicament. Only Taylor’s impenetrable brogue too often obscures the intelligibility of his dialogue. No such problem occurs with the clarity of Macdonald’s accent. Taylor’s adolescent Declan is physically utterly convincing but he would be advised to “suit the word to the action” Hurley grants no happy ending, inviting judgement, empathetic in spirit yet powerless in reality.


Using the Brechtian technique of projected titles to define place and certain lines of Libby’s play, Hurley allows an audience to witness the predictable decline that paints his characters as victims of circumstance and their society. Gritty, raw and gripping performances draw the audience in to the humour and the drama, the tenderness and the brutality, the hope and the despair  on a rollercoaster ride of emotion for which, sadly there is no solution, other than understanding. Perhaps that is the hope for Libby and Declan.


Hurley’s play, performed with such honest and powerful truth, is a mouthpiece for all those silenced and ignored.  It is not surprising that an audience should recognize this injustice in their standing ovation.
Posted by Canberra Critics Circle at 10:01 AM