THE MYSTERY OF HENRI PICK 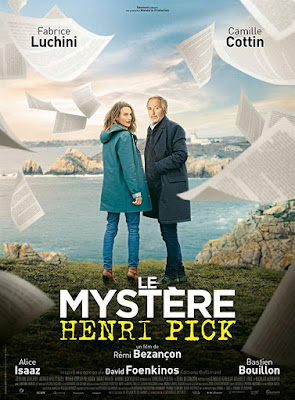 A delightful comedy-mystery of a movie, “The Mystery of Henri Pick” was adapted from the popular novel by David Foenkinos that has been translated into  multiple languages.  Director, Rémi Bezançon, keeps the tone light and the pace fast as the story unfolds

A young book editor finds a rejected manuscript in a library and decides to publish it.  It becomes an instant bestseller but a literary critic suspects a hoax, especially when the deceased author’s wife tells the world he never wrote anything “besides a grocery list”.  The unravelling of the mystery becomes a fascinating and enjoyable adventure as well as an amusing and very French comment on relationships and human behaviours.

At the centre of the film, Fabrice Luchini gives a fine comedic performance as the literary critic, Jean-Michel Rouche, who must solve the mystery to retrieve his reputation, damaged after a controversial television interview with the deceased author’s wife.  Unexpectedly drawn in to help him, the author’s daughter, Joséphine Pick, is deftly played by the luminous Camille Cottin.

There is also fine work by Alice Isaaz as the young editor, Daphné Despero, who finds the manuscript originally.  It was also interesting to see the German actress, Hanna Schuygulla, famous for her participation in the films by Fassbinder in the 1970s, in a small but key role in the movie.

Once again, here is a film that you feel only the French could make.  The light touch of the comedy aspects of the story and the interaction of the colourful but very real characters is so distinctively and delightfully French.

As the film progresses, we start to feel the same obsession as the leading characters to solve the mystery and, as it deepens, we begin to worry that maybe it will never be solved.  The director teases us expertly, keeping us guessing right up until the end.  Did we learn the truth?  You’ll have to see it to find out.