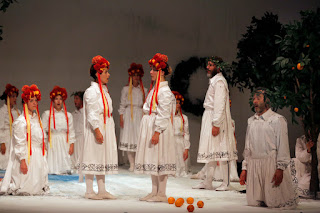 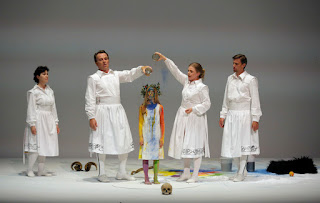 Romeo Castelluci’s interpretation of Wolfgang Amadeus Mozart’s Mass for the Dead Requiem offers a fiercely uncompromising vision of life’s inevitable extinction. His staging of Mozart’s Requiem on the Adelaide Festival Theatre stage prophesies impending doom in the advent of inevitable death. Mozart’s Mass for the Dead, written in part shortly before his premature death in 1791 at the age of 35 and completed at his widow Constaze’s request by Mozart’s student Franz Xaver Sussmayer confronts the fearful premonition of his mortality and death.
Castelluci casts Mozart’s Requiem as a contemporary initiation into the solemn nature of ultimate extinction. Under the baton of conductor, Rory McMahon, the Adelaide Festival Orchestra conjures a sublime rendition of Mozart’s complex composition, layered with sobriety, gravity and the inescapable reality of our virtual demise, comforted by faith and the hope of a celestial salvation in the hope of eternal rest. Raphael Picon’s musical montage ranges in its powerful diversity from the opening Gregorian a capella chant to the final offertory of Domine Jesu Christe by the Adelaide Festival Chorus, comprising the superb Adelaide Chamber Singers and the State Opera Chorus who have thrilled audiences with their work in Barrie Kosky’s Saul and The Magic Flute. They are no less uplifting in Requiem. Mozart has composed far more than a masterwork, lauding the repose of departed souls. His is a theatrical metaphor, steeped in faith and choral ritual, aroused by musical observance of the rituals of the requiem.

Castelluci presents a scenario of imagery that is both inspiring and disturbing. From the opening Plainchant, eerily sung behind the scene, Castelluci presents an old woman before a plain single bed and in front of a television announcing reports on drought and fires. The images of the nation’s recent disastrous Summer are inescapable references to natural disaster. Ritual and symbolism combine in a fresco of images expounding life’s fateful trajectory to eternal rest or damnation. The profundity is startling from the stark image of the old woman in her bed to the young girl daubed with coloured liquid and hunf onto the backdrop as sacrificial carcass or the Australian Dance Theatre dancers tableaud against the burnt out car as roadkill to the colourrful dance of folkroloric Eastern European ritual. Treble (Luca Shin) enters kicking a skull before him along the stage. His purity of voice transcends the horror of his action.  Bass David Greco scatters ash across the body of the young woman (Jacinta Hriskin) and the chorus perform the rhythmic choreography of Evelin Facchini while singing and observing the cyclical nature of death and celebration. In a work so heavily layered with imagery and symbolism, the audience is cajoled, mesmerized and challenged to consider Castelluci’s Atlas of Extinction. There is a lament for all that is lost, far more than mere death but a warning to civilization to beware the ultimate apocalypse. Only mercy, sung with such soul by alto Sara Mingardo with the Chorus in O Gottes Lamm can offer hope for salvation. This theme is echoed in Siobhan Stagg’s emotional rendition of the Communion. 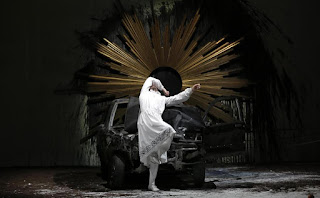 Castelluci’s piece de resistance is the image of utter extinction. During the performance, his Atlas of Extinction projects the history of extinction of animals , man, lakes, architecture ,Adelaide iconic structures, famous religious art, thought and finally me. All nature must meet its extinction and the inevitability of this prophetic truth overwhelms as the floor slowly rises and detritus and soil fall to the ground during the inevitable prediction that we are confronting our extinction and Castelluci’s theatrical triumph leaves us only, as Mozart’s masterwork has done, at celestial mercy.