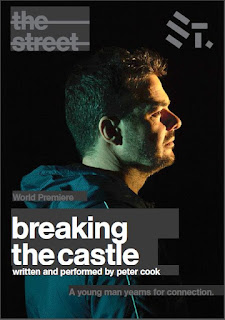 
It’s difficult to not believe that ‘David Smith’ is real, even though we are obviously watching a carefully constructed play.  In the writing, directing, design work and acting, Peter Cook challenges us to suspend our disbelief.

Why?  I think so that we come to see, as David does after successful rehabilitation, the beauty of a butterfly’s wings – and the difference between an honest friend and those who would prey upon one’s addiction.  There is an irony in David’s discovery that he has to learn to believe in himself, which means accepting that he needs to learn – and working to understand his teacher’s technique.  By the end of the play, he becomes a success, teaching through drama with disadvantaged young people.

We find a further layer of irony because ‘Dave Smith’ is an actor playing ‘himself’, played by Peter Cook playing…himself?  Of course, we cannot really know, but the details of David’s drug-taking and rehab experience make one wonder if ‘research’ was the author’s only source.  The significance of the title, “Breaking the Castle” is not revealed in the play, nor in Peter Cook’s program note:  “I wrote this play as a testament to everyone who’s had to struggle with things unseen, which in a sense is all of us…explores all facets of life, from memory to childhood to grief to pursuing one’s passion in life.”

The ‘castle’ which ‘David’ ‘breaks’ perhaps represents each person’s experience of what was traumatic for them, and necessarily must remain private – and must be respected as such even by those who know the story.  Yet, in a theatre, on a ‘stage’, ‘David’, now an ‘actor’ can act out to his fictional ‘audience’ – the role which we, Peter Cook’s real audience, play –  to publicly reveal David’s childhood traumas which underly his drug addiction.  From this we learn to respect other people’s privacy, even while we should help them to be brave about facing up to their damaging traumatic experiences.

And so, Peter Cook is right in concluding his note: “It’s theatre for everybody, no matter who you are or where you are from.”  A brave piece of theatre, in fact.

Breaking The Castle was developed in 2019 through The Street’s First Seen: new works-in-progress program and further developed later in the year with dramaturgy support from Shelly Higgs.  It is an excellent example of the developmental theatre work The Street continues to offer and will be shown at HotHouse Theatre in Albury-Wodonga after this Canberra season.