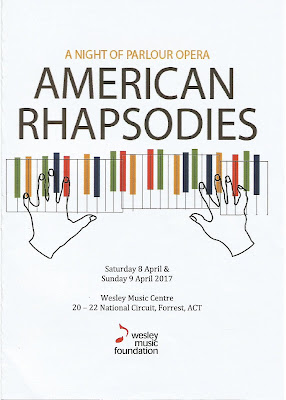 Devised and presented by Louise Keast and Veronica Thwaites-Brown, this delightful little presentation combines two short one-act operas with other items to create a thoroughly diverting program of twentieth century music which they have labelled “parlour opera”.

Gian Carlo Menotti had a hand in three of the items. He wrote “The Telephone”, and “Lullaby” is from his opera “The Consul”. He also provided the words for “ A Hand of Bridge” for which Samuel Barber provided the music. Both were contemporaries of George Gershwin, which provided a good enough excuse to include Gershwin’s “Rhapsody in Blue”.

On entering the auditorium, the audience was greeted with the cast of “A Hand of Bridge”, Louise Keast, Veronica Thwaites-Brown, Kenneth Goodge and David Smythe, already seated onstage, in a beautifully detailed 1950’s parlour setting, deeply engaged in a game of bridge. Accompanist Emily Leong entered, took her place at the grand piano, and the opera began.

Lasting only nine minutes, and sung in English, the opera takes the form of four short ariettas, sung in turn by each of the characters, in which they express their inner thoughts. Unfortunately, despite excellent performances by the four soloists, these thoughts were mostly unintelligible due to the very bright acoustic of the piano, which tended to drown out the singers, at this performance.

Then, after excess furniture had been efficiently removed and replaced, intriguingly, by a 1950’s style television set centre-stage, Emily Leong took the stage to perform George Gershwins’ “Rhapsody in Blue”.  The reason for the television set was soon revealed as during Leong’s efficiently played solo-piano version of the rhapsody, a very funny selection, carefully edited by Amanda Keast, of moments from vintage films was shown on the television set. George Gershwin may not have approved, but inwardly he would surely have smiled.

The lovely “Lullaby” from Act 11 of Menotti’s “The Consul” was given a sensitive performance by Veronica Thwaites-Brown as she tucked her well-wrapped baby into its cradle. Then, following another quick adjustment, the stage was ready for a delightful performance of Menotti’s “The Telephone”.

This delicious little comic opera, written by Gian Carlo Menotti in 1947, tells the story of Ben (David Smythe), who arrives at Lucy’s apartment bearing a gift with the intention of  proposing to her before setting off on a trip.  Lucy (Louise Keast) is so occupied in interminable conversations on the telephone that Ben never gets the opportunity. Finally, with time running out,  he leaves, but decides to make one more attempt. He phones Lucy from a telephone booth outside. Lucy consents and they join in a romantic aria over the phone. At the end of the aria Lucy makes sure Ben remembers her phone number.

Louise Keast gives a delightfully effervescent performance as Lucy, which is well matched by David Smyth as the frustrated, but resourceful suitor, Ben.  Veronica Thwaites-brown’s direction paid careful attention to detail, while Emily Leong achieved the correct balance with her accompaniment which allowed Menotti’s clever writing to be fully enjoyed.


Apart from its entertainment value, and a rare opportunity to hear two delightful short contemporary operas, “American Rhapsodies” also provided a witty and meticulously presented showcase for the five talented local artists in the cast.  If you missed it this time around, “The Telephone” is to be given an encore performance as part of the “Wednesday Lunchtime Live” series at the Wesley Music Centre on 26th April. Here’s your opportunity.