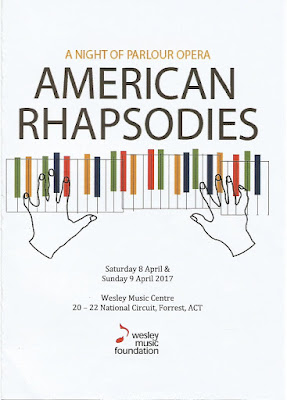 The program commenced with Samuel Barber’s short opera, ‘A Hand of Bridge’, which had a libretto by Gian Carlo Menotti.  Essentially an evening of card playing by two unhappily married couples, the opera shows the dark thoughts of the people at the table.  Each singer produced nicely developed characterisations and sang their roles well.

Pianist, Emily Leong, played ‘Rhapsody In Blue’ by George Gershwin in the composer’s arrangement for solo piano.  Leong captured the driving rhythms of the piece very well and showed great sensitivity in the more reflective moments in the score.

Veronica Thwaites-Brown sang ‘Lullaby’ from Act Two of Menotti’s opera, ‘The Consul’.  A plaintive song by a woman to her babe in arms, Thwaites-Brown gave a heart-felt and believable performance and sang beautifully.

The final work, Menotti’s ‘The Telephone’ was a particularly good showcase for Louise Keast as the dizzy young woman who is more interested in conversing on the telephone than allowing her ardent lover to propose to her.  A very funny work, both Keast and David Smyth gave good performances character-wise and were especially effective when singing the duets.

A lot of thought has gone into this presentation with a setting suggesting rooms in a typical American apartment block.  This hour long program of accessible and entertaining works was most enjoyable and nicely done.