Is peace between former enemies possible while the horror of war still haunts them? The process certainly gets complicated in the latest film from the urbane director, Francois Ozon.

Frantz is a loose adaptation of Broken Lullaby, an Ernst Lubitsch film of 1932 that was itself based on a play written in the 1920s, soon after the Great War. It is not the kind of film usually made by for Ozon, who is more inclined to the intimate, sexy, sometimes over the top, contemporary drama like (Under the Sand, Young and Beautiful) or the not so subtle comedy (Potiche). What is he up to here?

Lubitsch, one of the great directors of cinema’s golden age, had quit Germany after WWI and joined the coterie of the expatriate European creatives who flourished in Hollywood. He made his name with sophisticated, witty comedy. Broken Lullaby was atypical for him too, but more easily explained by his background.

Most of the action in Frantz takes place in Germany, embittered and defeated in 1919. A young Frenchman, Adrien (Pierre Niney) has made a pilgrimage to the grave of a young German he once knew, a casualty of the Great War that had engulfed Europe. At Frantz's graveside, Adrien encounters his former fiancée, Anna (Paula Beer), and against all the odds, he begins to make a connection with her and the dead man's grieving parents with whom she lives.

The relationship that develops between Adrien and Frantz's relatives is at once intimate and impossible, not unlike the complicated personal bondings that characterise other films by Ozon, like the excellent Swimming Pool and In the House. Adrien is not what he seems. He is compromised and even if motivated by the highest of intentions, his actions imperil a fragile stability because of the terrible secret that he harbours.

There is a lot at stake for all in what seems like an impulsive intrusion, and the two young actors, Niney and Beer, convey the vulnerability of youth, especially after the trauma of war. Niney doesn’t quite convince this viewer in his role, but Beer is especially effective, her naturalistic performance offering what contemporary audiences are most comfortable with. 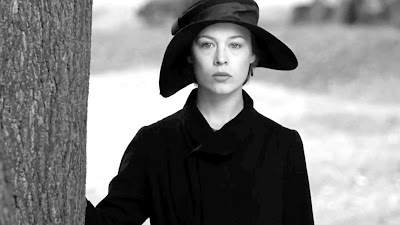 And Anna is bold. She follows Adrien when he returns to Paris and eventually tracks him down at his family home, with more surprises to follow. Adrien is never quite what he seems. Anyone familiar with Ozon's body of work might be looking for a homoerotic sub-text there too. Could be, but it never seems explicitly articulated.

The film is lovely to look at. A few flashbacks in colour signal the exuberance of pre-war Europe and the promise of new hope in the present, otherwise the aesthetic is monochrome.  Perhaps with black-and-white Ozon wanted to honour the great age of silent cinema when expressionism was in its prime in Germany.

Whatever he intended here, his historical drama in classic early 20th century studio style, is thoughtful, subtle and rather exquisite. It could seem dated with its precise plot twists and turns and self-conscious resolution, but the traditional narrative suits Ozon surprisingly well, and it is endowed with a wonderful central performance from newcomer Beer. Her character gives it heart and soul.