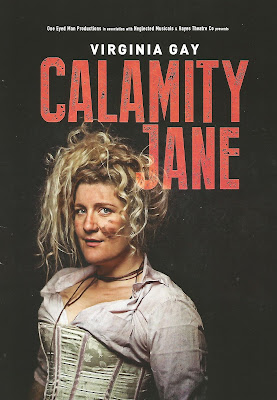 “Calamity Jane” originated as a film vehicle for Doris Day in 1953. In 1961 it was adapted for the stage, and although it has never received a Broadway production the stage version has been popular with amateur companies throughout Australia. This production at The Hayes Theatre is the first time it has been produced professionally in Australia, and true to Hayes Theatre tradition this current season has been a sell-out.

It’s not hard to see why, even taking into account The Hayes Theatre’s very limited audience capacity.  Richard Carroll’s ingenious; theatre-restaurant style concept sees the tiny Hayes Theatre converted into a down-at-heel western musical hall. Audience members are admitted by the side-door instead of the usual entrance. On entry they’re greeted by Tony Taylor in the guise of the jovial, though somewhat irascible, proprietor of the Golden Garter Saloon, and other cast members setting up a party atmosphere.

Seven accomplished actors play all the roles, with hard working musical director, Nigel Ubrihien occasionally joining in, providing the musical accompaniment from a small upright piano, with the actors playing other instruments as required by Ubrihien’s clever arrangements, including a tuba, ukulele and guitar. The score contains at least three memorable songs in “My Secret Love”, “The Black Hills of Dakota”, and “The Deadwood Stage” and all are well sung by the cast.

On-stage audience members are co-opted as required to help move props, set tables, or deliver lines. It works a treat, mainly due to Carroll’s witty, inventive direction, and a superb cast headed by Virginia Gay whose knock-out performance as Calamity Jane, provides the production with its heartbeat.
Sheridan Harbridge is terrific in the dual roles of Susan, the resident soubrette at the Golden Garter Saloon, and the hard-boiled music hall star, Adelaide Adams. Rob Johnson gives her a run for her money, in the bad acts department, playing the unfortunate Francis Fryer, booked to entertain at The Golden Garter Saloon in mistake for beautiful actress Frances Fryer.

When Fryer is unmasked, Calamity Jane sets off for Windy City to book another headliner, Adelaide Adams, but meets up with Katie Brown, (Laura Bunting) who convinces her that she is really Adelaide Adams and returns to Deadwood with Calamity. No prizes for guessing that Katie too is unmasked, but by then has been befriended by Calamity, who helps her set up house.

Soon both friends are competing for the affections of town hunk, Lt. Danny Gilmartin, (Matthew Pearce) and when Calamity discovers Gilmartin kissing Katie she goes ballistic. Gay’s performance in this scene is astonishing, lifting the production out of realm of theatre –restaurant into real drama. Wild Bill Hickok (Anthony Gooley) defuses the situation by proposing to Calamity and predictably, all live happily ever after, following a wedding scene guaranteed to send the audience home chuckling.

Lauren Peters knock-about set and costumes work well in the tiny Hayes theatre, as do the un-miked vocals for an entertainment-packed production which if picked up by some enterprising venue-owner, could probably run for years.