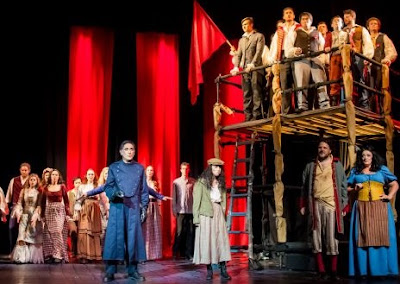 A runaway horse cart has crashed and pins a bystander to the ground, slowly crushing the life out of him.  A crowd gathers and stares in horror: with nobody strong enough to dislodge the massive cart, they can only watch as life slowly leaves the man.

That is, until the slender, elderly mayor slips in and heaves the cart into the air long enough for the man to escape.

Free Rain theatre's new production of Les Mis is defined by the casting of musical theatre veteran Peter Cousens as reformed jailbird Jean Valjean.  Cousens gives an accomplished performance as a spiritual, otherworldly Valjean, but is not stolid enough for the superhuman strength the part calls for.  This is a grandfatherly Valjean we can picture teaching Cosette to dance by standing on his shoes rather than a powerhouse capable of lugging a body through the sewers of Paris.

Javert also misfires, with the usually very watchable Tony Falla apparently uncomfortable with the ruthless Javert, a little too neurotic and uncertain to feel implacable.  Director Cate Clelland tries to show us Javert's innate goodness, but this is at the cost of weakening the musical's antagonist.

Les Mis normally depends on a revolving stage both for its elaborate scene changes and the constant sense of movement the musical demands, and here the choreography by Michelle Heine fails to bridge that gap.  Productions of Les Mis can easily fall into the trap of making scenes too cluttered and busy, but here there is the opposite problem, with uninteresting presentation of key scenes.  "Do You Hear The People Sing?", where the students gather an army as they travel through the streets of Paris, was delivered instead with the students standing in a row.

The set also hampers the production.  The gate to Valjean's house stands to the left of the stage orphaned for much of the production, while a simple scaffold to the right provides the only elevation on stage.  A little extra elevation would have helped convey the compact chaos of the city sequences.  The barricade, when it is finally pieced together in Act 2, is also underwhelming.  Director Clelland is known for engaging sets, for example in 2012's To Kill A Mockingbird, or 2014's August: Osage County, making the feebleness of the set design here especially noticeable.

While the minimalist approach to set design simplifies scene changes, at times it is at odds with what is happening on stage.  Young Cosette delivers her lonely "Castle On A Cloud" while the pub is filling in behind her, and Marius' "Empty Chairs and Empty Tables" is performed with neither chairs nor tables anywhere in sight.

But even with these problems, Les Mis is still an extremely involving musical, and mostly strong singing compensates for weak staging.  The experienced Amy Dunham is on good form as Fantine.  Sam Ward is a little theatrical as Marius but performs with confidence and sings well.  Nicole Carr's Eponine is much more sedate than the character is normally played, but her futile love for Marius is completely heart-breaking.  Jim Adamik as Thenardier is aware that the clownish part is one he was born to play, and leaps on the chance to emphasise the inn-keeper's drunkenness, to the point where Janie Lawson as Madam Thenardier becomes a vital steadying influence.

After a string of very ambitious and polished musicals, especially last year's production of Wicked, Les Mis is a bit of a disappointment, let down by weak presentation and direction.  The sound tech was also wobbly on opening night, with noticeable problems with cues and volume.  The story is still very moving, and the solo performances were striking - this is not an easy musical to sing - but this average production of Les Mis entertains but does not excel.
Posted by Canberra Critics Circle at 5:15 PM