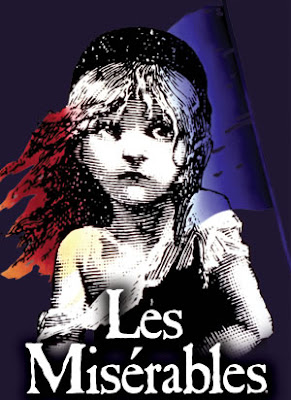 One of the most intriguing facts about the musical ‘Les Miserables’ is that the original English production in London in 1985 opened to generally negative reviews.  The public disagreed with the critics and the show became a world-wide phenomenon.

Based on Victor Hugo’s 1862 epic novel, the story follows Jean Valjean, a man convicted to 19 years imprisonment for stealing a loaf of bread.  Unable to break free from his convict past, he disappears during his parole period and is relentlessly tracked over the years by police inspector, Javert.  His concerned interaction with the characters he encounters gives the show an emotional heart that makes it so universally appealing to audiences.

Well known professional performer, Peter Cousens, plays Valjean with great sensitivity and believability.  His singing of this demanding role is truly wonderful.  Sam Ward, in his first professional role, has a superb voice and sings the character of Marius very well.  Tony Falla was a strong and threatening Javert and there was fine work by most of the many principal singers.  Particularly outstanding were Janie Lawson and Jim Adamik as the Thenardiers, Joss Kent as Gavroche and Nicole Carr as Eponine.

The production is played on a simple setting designed by Michael Sparks that works fine.  Lighting by Hamish McConchie utilises a lot of atmospheric smoky effects which works well but the side lighting casts some shadows on faces at times.  Sound design by James McPherson was very effective and the balance between singers and orchestra was just right.  The large number of period costumes were well-designed by Fiona Leach.  Choreography by Michelle Heine is mostly character movement and looks nicely natural but the movement for the prisoners in the opening scene was too stagy.

Musical director, Nicholas Griffin, has done an excellent job with the singers.  Diction by all of the principals is quite clear and there is really exciting depth in the group singing by the chorus, especially in the rousing songs ‘Do You Hear The People Sing?’ and ‘One Day More’.  The orchestra, conducted by Ian McLean, produces a superb sound, bringing out all of the colour in this rich score.

Cate Clelland has directed an efficient production that should please audiences who love this show.  The focus is on the singing but there are some rather wooden acting performances that need more attention.  Overall, this is an entertaining production of a much loved show.