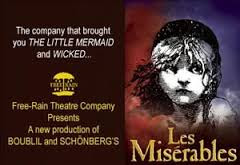 “Les Miserables” is one of the great musical of the twentieth century. Not only does it have an outstanding score by Boublil and Schonberg, it also has a cracking story to tell, thanks to Victor Hugo, which the original director, Trevor Nunn, translated into an incredible stage spectacle which has thrilled audiences around the globe for decades.

For its new, stripped back production, Free Rain Theatre have dispensed with the spectacle, opting instead for a bare stage with two permanent set-pieces on each side. One represents a garden gate, the other, possibly a tower, and both remain in full view throughout, regardless of the scene being played. Neither adds much atmosphere. Nor do the vertical red streamers which decorate black drapes at the back.

The only indication of changes in time and place is provided by dates projected onto the back curtains. Tables and chairs are added for the tavern scenes, and a rather good barricade in the second act, which provided the best scene of the night. Elsewhere, an over-worked fog machine and spotlights were relied upon to provide atmosphere, leaving the cast very exposed.

Unfortunately Cate Clelland’s direction on this occasion is at best, pedestrian, with the production giving the impression on first night of being under-prepared. Very little emotional connection was achieved between the principal characters, with over-wrought emoting substituting for heartfelt emotion. This was particularly noticeable in the scenes between protagonists, Valjean and Javert, whose exchanges are reduced to slanging matches instead of high drama. Javert’s suicide, normally a dramatic highpoint, is indicated simply by a blackout. Most of the ensemble numbers lack  drive and vitality. Couples in the tavern scenes resort to earnestly humping each other in the forlorn hope of appearing salacious.

The costumes are of the wardrobe-basket type, with little attention paid to period detail. The costumes for the ballroom scene are pretty, but would look more appropriate in a  production of “Beauty and the Beast”, except in this production the men wear short back and sides instead of powdered wigs.

The strength of this production is in the music, with the choruses and songs generally well sung, especially by the principals, led by Peter Cousens as Jean Valjean.  Vocal highlights during the night were provided by Amy Dunham (Fantine) quite superb in “I Dreamed a Dream”, Nicole Carr (Eponine) with “On My Own”, and  Sam Ward (Marius), impressive in “Empty Chairs and Empty Tables” sung on this occasion seated on garden steps instead of in a deserted café.

The large orchestra, conducted by Ian Mclean, provided confident, full bodied accompaniment throughout with the sound design achieving excellent balance between the singers and orchestra, allowing the lyrics to be heard clearly.

While it should be reported that some members in the opening night audience felt impelled to give the performance a standing ovation, it was clearly well-below Free Rain Theatre’s own best standard set in productions of “Phantom of the Opera” and “Mary Poppins”. Hopefully it will improve as the season progresses.

This review was first published in the digital edition of CITY NEWS on 7th April 2017.
Posted by Canberra Critics Circle at 11:31 PM