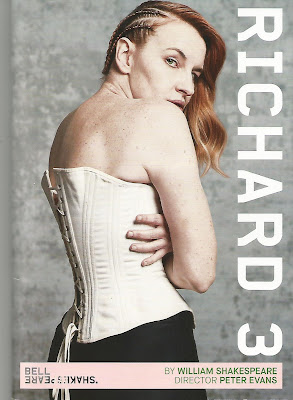 If you’re of the mind that sitting in a theatre watching a rarely performed 400 year-old Shakespearean play about a murderous king, with the king played by a slip of a girl, might not be your idea of a fun night in the theatre, then think again.  When the director is Peter Evans, and the slip of a girl is Kate Mulvany, this play becomes a ripping yarn, packed with mesmerising performances, the memory of at least one of which is likely to stay with you for a very long time. And even though this play was written centuries ago, the subject matter could hardly be more relevant. In fact in the program notes Peter Evans states “…this play is completely about Trump”.

In this production, the action of the play is confined to a single luxurious room in which Richard is continually surrounded by his elegantly dressed family, and a constantly evolving group of loyal sycophants. The period of the furniture and clothes is ambiguous. When not talking directly to Richard, the characters pose elegantly and plot among themselves in the background. More than once they perform a strangely unsettling re-wind masque neatly confirming the decadence and hopelessness of their situation which compels them to   watch on calmly as murder takes place.
Ten actors play all the characters. Several of the men play multiple roles. Mulvany is not the only woman in the cast to play a cross-gender role. For those not familiar with the play, this tends be a little confusing, but the main thrust of the play, and the intentions of the characters, is always clear.

Kate Mulvany is simply astonishing as Richard. Gender quickly becomes irrelevant in her interpretation of this misshapen despot, completely ruthless and self-absorbed in his ambition to become the king.  From the moment she steps on the stage and confronts the audience with a dismissive leer, it is impossible to take your eyes off her as she scampers around the stage like some malevolent spider looking for its next victim. It’s a performance full of risk, and Mulvany embraces each challenge with obvious relish.

Evans has surrounded Mulvany with a top-notch cast which includes Meredith Penman as Queen Elizabeth, Sarah Woods as the Duchess of York, and Sandy Gore, quite splendid as the indomitable Queen Margaret. Rose Riley is excellent playing both Lady Anne and Prince Edward, both of whom come to sticky ends. James Evans as Richard’s protector, Buckingham, and James Lugton, Ivan Donato, Gareth Reeves and Kevin Macisaac, each bring strong commitment and presence to their multiple roles in a production that constantly fascinates with its wit and complexity.